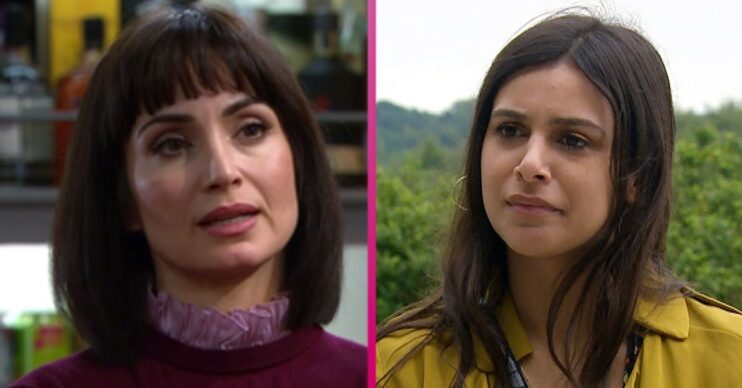 Meena might be a murderer but she's no match for Leyla

Leyla Harding in Emmerdale might try and kill murderer Meena Jutla when she finds out the truth about Leanna Cavanagh‘s death.

Actress Roxy Shahidi has revealed Leyla is capable of killing the serial killer.

Viewers know nurse Meena brutally murdered Leanna after the teenager discovered the truth about her.

She chased her through the village before pushing her over the bridge in a violent altercation.

And as Leanna lay dying, she stole her precious ring and mocked her.

Leanna’s death has caused devastation through the village – not least to her dad Liam and his wife Leyla.

But while Meena has seemingly got away with the murder – if the truth comes out she will have to hide from Leyla.

Protective Leyla has shown she is capable of killing after she tried to murder son Jacob’s abuser Maya a few years ago.

And she will be gunning for Meena.

“Oh, she would try and kill her!” actress Roxy told Metro.

However she might want to hurry up with Meena having already selected her next target.

In upcoming scenes, she’s determined to have a girls’ day with Victoria Sugden.

Victoria has been spending a lot of time with Meena’s boyfriend David and the two previously shared a kiss, which Meena is unaware of.

“I’m very protective of my characters and Victoria is like getting a bit too close to David so, you know.”