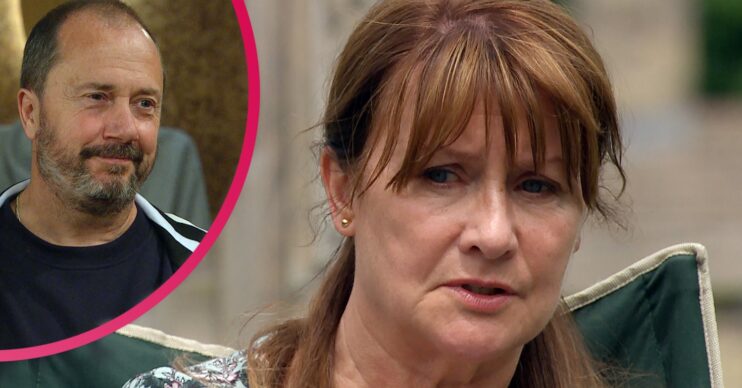 Wendy is terrified when Russ turns up out of the blue

Emmerdale spoilers reveal that Victoria is in danger after Wendy’s ex makes a dark threat next week.

Elsewhere, Sarah makes a secret rendevouz and Liv falls off the wagon with potentially tragic consequences.

Wendy’s shaken to find Russ on her doorstep.

Angry about his mother’s will and how she left it all to Victoria’s baby Harry, he demands they talk.

Meanwhile, oblivious Bob looks forward to an evening with Wendy but she is clearly anxious about Russ.

Soon it’s established that Russ is her abusive ex-husband with a criminal past.

He demands she get his inheritance back and is going nowhere until she does.

She’s been forced to accept his demands and soon she’s in hot water as Russ says that if he doesn’t receive the cash now she and Vic will face consequences.

Vic and Bob try to make the most of having Russ around, but only Wendy knows the truth.

At the playground, Russ continues to play the doting granddad whilst laying it on thick to Victoria about his lack of money.

How can Wendy solve this nightmare situation?

What else is happening next week in Emmerdale?

Elsewhere, Sarah agrees to meet Chloe behind Lydia’s back.

When the two meet, Chloe wants to give her a bracelet that belonged to her late sister Gemma. Will she accept?

Also happening next week in Emmerdale, Liv falls off the wagon after constant talk of sobriety from pals Aaron and Vinny.

When she wakes up with no recollection of the night before, Gabby thinks something terrible happened to her.