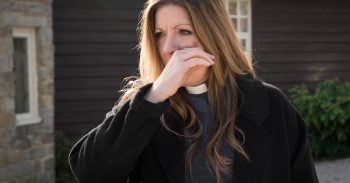 Emmerdale’s Harriet will take Malone on to save Will

Malone has a connection to Harriet - but will she bring him down?

Emmerdale’s Harriet Finch is going to take on DI Malone to save her partner Will Taylor.

The police officer turned vicar has been blissfully ignorant of the hell Will has been going through at the hands of evil Malone.

But soon she will start to use her old detective skills to realise something bigger is going on.

Actress Katherine Down Blyton has teased how Harriet will be the one to deal with the corrupt cop who has been terrorising the village.

“She doesn’t know all the details, but she’s not daft,” she told Inside Soap.

“And with her police past, she knows something’s not right. So she has to put her detective head on again and try to get to the bottom of it.”

Promising that Harriet will take “big risks” to take on Malone, Katherine added: “”Well, all I can say is watch this space — and believe in girl power!”

“All of this has kicked off from Will’s stress, so she’s worried for Will and what he’s got himself involved in with Malone,” she added teasing the history between Harriet and Malone.

The show has hinted the pair have an explosive history with Harriet being the undercover officer who brought down Will’s drugs empire all those years ago.

However, she still doesn’t know that Will took the fall for Malone who is still running things.

Katherine added: “Harriet and Malone obviously have a history, as she worked with him while she was in the police. She’s not happy about him being back in their lives, and she knows Will fears him.

“She doesn’t want to give her concern away. She has to tread very carefully to get some answers from Malone without dropping anybody else in it.”

Will Harriet be able to keep her cool enough to find out the truth of what’s going on?

Or will she become another of Malone’s victims?

He said: “They might know each other, yes… So far they haven’t bumped into one another. There might be a connection there.

“Also, there is another reason Malone is in the village – which I’m not going to give away yet!”

Could it be Harriet? Leave us a comment on our Facebook page @EntertainmentDailyFix and let us know what you think!