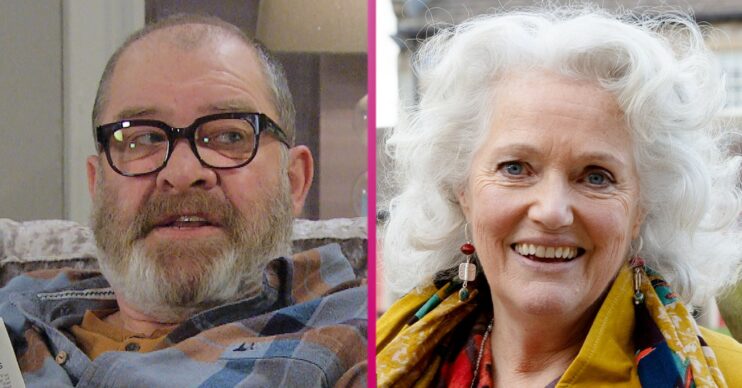 Could we see a new romance soon?

Emmerdale fans are predicting a new romance for Bear and Mary after their scenes together in last night’s episode (Thursday, April 29 2022).

The two had a some scenes together and it looks like fans are picking up on a spark between the pair.

Read more: Who plays Rhona’s mum Mary Goskirk in Emmerdale? Where have you seen Louise Jameson before?

In last night’s episode Mary came into the pub to look for Bear after Marlon told her he wanted to see her.

He gave her the newspaper to give Marlon so he could have a head start before he came over.

Bear then revealed to Mary and Paddy that he had been visiting Marlon in hospital with crossword puzzles.

However he didn’t want to intrude on Mary and Rhona now Marlon is back home.

Mary told Bear he wasn’t intruding and invited him over.

Later Bear and Marlon did a crossword together and Mary and Rhona watched.

The crosswords appeared to be helping Marlon with his speech and spelling.

Rhona was amazed to see how good Bear was with Marlon and realised the crosswords must be why Marlon has been making good progress.

Bear offered to come again and Mary said: “How about today after today? Eight letters.”

Bear laugh and said: “Ey a woman after my own heart. I’ll see you then.”

Now fans are predicting a new romance between Bear and Mary.

Ooh… Bear & Mary going to happen?
Marcus slowly showing similar traits to his father
Leyla's cause an unnecessary amount of shit for Jai. For once I felt for him.
Bear & Marlon are sweet with their homeschooling situation 😂
Kim & Dawn need more scenes. #emmerdale

bear + mary? that could stop her being so annoying #emmerdale

Mary arrived in the village earlier this year.

It hasn’t been revealed if she has a partner or if there any potential romances.

But we do know she’s been lonely too – could a relationship with Bear be just what they both need?

What do you think of Bear and Mary in Emmerdale? Leave us a comment on our Facebook page @EntertainmentDailyFix and let us know what you think!