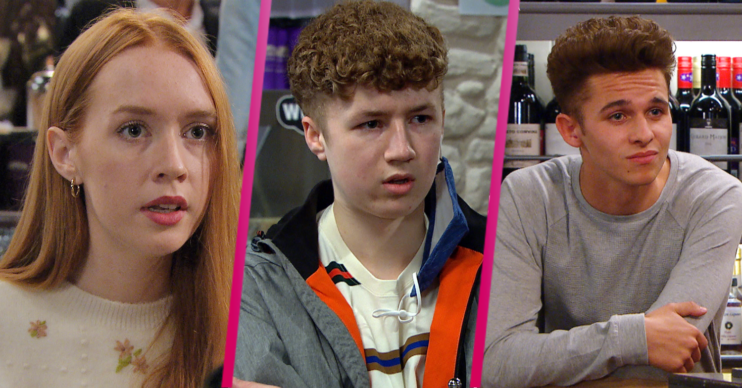 Chloe and Noah began a secret relationship a few weeks ago

Recently Chloe moved to the village after being thrown out of her home by her father, who is in prison.

Chloe became sick of her father’s controlling behaviour and asked him to back off, as she wanted a relationship with Noah.

Although she thought he understood, he sent his men to Emmerdale with Chloe’s belongings, making it clear she was no longer welcome at home.

Chloe has been living with Kerry, who previously worked for Chloe’s dad and looked out for her while he was in prison. However Kerry has continued to try and keep Chloe and Noah apart.

In Tuesday’s episode (December 14) Noah went into David’s shop and found Chloe in there with Jacob.

Chloe told Noah that Jacob’s friend was DJ-ing at a club and they could sneak him in, but he didn’t seem that interested.

Noah asked what she was doing in the shop and she told him she was shopping.

When he asked what for, Jacob told Noah to take a hint and Chloe told him she was getting tampons.

Later in the café, Noah and Chloe went for a drink. When she was in the toilet, Jacob came in and asked if Noah and Chloe wanted to go for a pizza but Noah lied saying Chloe is ill.

Fans are now predicting that there could be a new love triangle with Chloe, Noah and Jacob.

Noah is Gona become possessive of Chloe. Then shel probably get with Jacob #Emmerdale

Jacob isn't interested in Chloe now as well? It'll be barnets at dawn with him and Noah #Emmerdale

Chloe hanging around the shop to see Jacob 👀 #Emmerdale

Read more: Emmerdale: Will anyone die when the Woolpack explodes?