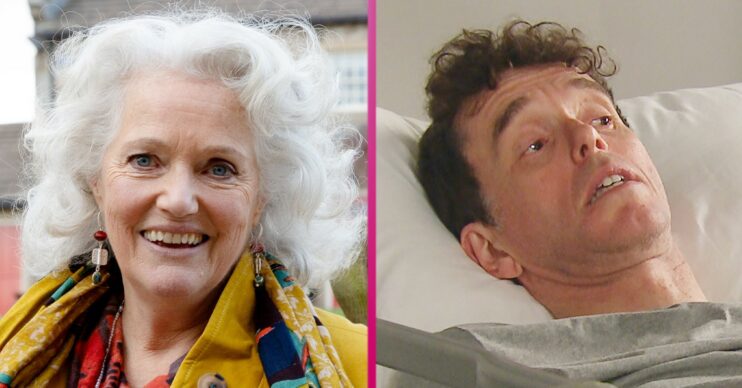 Mary has been looking after Marlon

Emmerdale fans have been left fearing Mary will try to kill Marlon after he went back into hospital in last night’s episode (Tuesday, May 3 2022).

Marlon appeared to have a bad cough in last night’s Emmerdale. After being taken out to the allotment with Bear and Liam, his cough got worse and Liam rushed him to hospital.

However fans noticed Mary appeared to be acting strange and feared she may try to kill Marlon.

Back in March, Marlon had a stroke and ended up in hospital.

He spent a month in hospital and recently returned home.

This week Rhona returned to work part time, leaving Marlon at home with her mother, Mary.

He went out to the allotment with Bear and Liam, but while they were outside Liam noticed Marlon coughing.

He rushed him to hospital, meanwhile Bear went to tell Rhona what happened.

Rhona and Mary rushed to the hospital where Liam told them Marlon has developed aspiration pneumonia and doctors believed it was caused by food caught in his lungs.

Mary gave a concerned look, knowing this could set back Marlon’s recovery.

Later Mary apologised to Rhona saying she should’ve taken better care of Marlon and shouldn’t of let Bear take him out.

Rhona prepared to go into see Marlon and asked Mary if she was coming.

Mary is going to kill Marlon. I can just see it now!

Mary responded saying: “It’s you he loves. It’s you he wants to see.”

However fans are worried that Mary isn’t looking after Marlon properly could try to kill him as she feels he’s a burden to Rhona.

That's a point. She's always trying to make Rhona feel he's a burden to her.

Mary’s creepy. Is she planning on offing poor Marlo, I wonder? #Emmerdale

Read more: Who plays Rhona’s mum Mary in Emmerdale? Where have you seen Louise Jameson before?

Have you been watching Emmerdale this week? Leave us a comment on our Facebook page @EntertainmentDailyFix and let us know what you think!