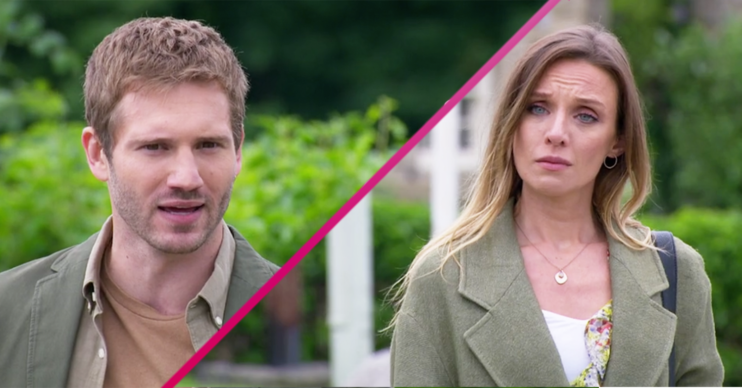 Jamie has left fans sickened with his threat

Emmerdale fans have been left disgusted by Jamie Tate’s threat to beat his wife Andrea.

Andrea has blackmailed Jamie into ending things with Belle and returning to their marriage.

She is threatening to go to the police and shop him for Moira Barton’s hit and run if he leaves her again – after convincing him into not handing himself in.

Viewers have watched as desperate Jamie tried to convince Andrea that he is really giving their marriage a chance.

But secretly he has been embracing his legacy as a Tate and plotting to destroy her.

However, last night (August 7), she caught him begging Belle not to hate him – and she lost it at him.

“Very touching,” Andrea said before putting Jamie in his place.

“Sorry, am I supposed to just stand there and watch you grovel to your mistress? And I’m not meant to say anything.

“And you wonder why I get suspicious about your text messages when you have a go at me when you do.

“It’s easy for me, is it? Knowing everything you’ve done. Are you forgetting that you’d be behind bars if it wasn’t for me right now?”

She added: “You tell me that there’s nothing going on between you and Belle any more and yet here you are begging her in the street.

“I am doing everything I can to hold this family together, all I am asking for is a bit of effort.”

But the effort to keep up appearances was too much for Jamie and he finally let his mask slip.

Promoting violence from a big soap program is not cool!!!! I’d delete your tweet if I was you.

He thundered: “You want to talk about effort? Okay… Living a lie is an effort, lying next to you in bed is an effort, pretending I love you when all I want to do is smash your nasty face in is an effort.

“So don’t you make out that I’m not trying here because when the effort stops you’ll know about it.”

Viewers were completely sickened by Jamie’s threat of violence.

One said: “He threatened her with violence. How is that an acceptable way of standing up to someone?”

Read more: Emmerdale viewers disgusted with Nate’s behaviour as he finds out Tracy is pregnant

A second said: “Did Jamie really have to say such vile things to Andrea? Pretty much admitting that he wants to attack the mother of his child! #Emmerdale.”

Did Jamie really have to say such vile things to Andrea? Pretty much admitting that he wants to attack the mother of his child! #Emmerdale

However, a third took issue with the soap seemingly condoning Jamie’s threat of violence.

They said: “Why is it one-nil to Jamie? Threatening violence to his WIFE that HE cheated on???

“If this was real life it would be a very different outcome!! Promoting violence from a big soap program is not cool!!!! I’d delete your tweet if I was you.”

What do you think of Jamie’s threat? Leave us a comment on our Facebook page @EntertainmentDailyFix and let us know what you think!