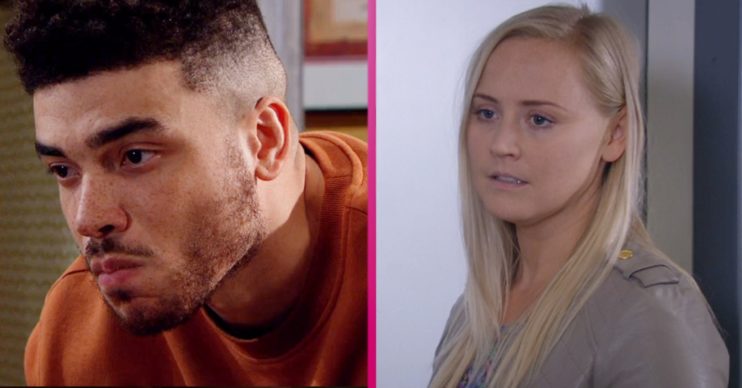 Tracy and Nate haven't been together long

Emmerdale viewers were left disgusted with Nate Robinson’s behaviour after he found out his girlfriend Tracy is pregnant.

In last night’s episode of the ITV soap (Wednesday, August 5), Nate took Tracy to A&E after she hurt her hand.

However before having an X-ray she needed a urine test. But both Tracy and Nate were stunned when the nurse returned to the room and revealed she is pregnant.

Tracy stated she didn’t think it was possible as she was on the contraceptive pill. However she learnt that it may not always work if you have been sick or had diarrhea less than two hours after after taking it.

Later, when Tracy and Nate returned to Tug Ghyll, Nate gave her a hard time for her contraception not working.

He said: “I didn’t even know the pill might not work. If I had I’d have been more careful.”

When Tracy questioned if he was saying she needed to be more careful, Nate responded saying: “You’re the one taking it.”

Tracy defended herself saying she got sick and said she didn’t plan to get pregnant as they hadn’t been together long.

But Nate seemed to think Tracy planned it saying she knew he was a “safe bet” and wouldn’t abandon a child, as he grew up without a father.

Tracy quickly pointed out that her ex-husband David also grew up without a father but it didn’t make her want to keep his unborn child.

Finding out Tracy was pregnant once before

When he found out Tracy had aborted David’s baby, he said: “You’re telling me you’ve done this before?”

Tracy explained what happened between her and David and that the form of contraception they used also didn’t work.

But Nate just said: “You’ve got form for this?”

Poor Tracy broke down in tears saying she hated herself for having an abortion. However Nate was totally unsympathetic saying: “If you felt that bad about it, why let it happen again?” blaming Tracy for getting pregnant.

Viewers were completely disgusted with Nate’s behaviour and for shaming Tracy about having an abortion.

Nate basically shaming Tracy on her abortion is disgusting. #emmerdale

Nate was a knobhead tonight. From his attitude in the hospital to the way he behaved at the end. The audience are really never going to like him at this rate #Emmerdale

I dunno who the hell Nate thinks he is talking down to Tracey!! #emmerdale

How thick is nate? You can get more than unwanted pregnancies without protection so how about taking some responsibility for yourself, idiot?! 🙄#emmerdale

Poor Tracy, someone give Nate a slap 🤬 #Emmerdale

Afterwards, Tracy ended up kicking Nate out and telling him they’re done if he isn’t going to support her.

Will they be able to sort things out? Will Nate step up?