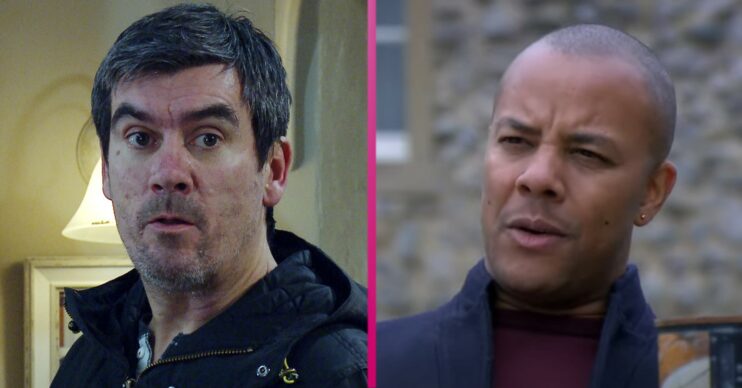 Al wants to get rid of the pub

Emmerdale fans have been begging for Cain to sort out Al as he tried to ruin The Woolpack once again.

Viewers know that Al and Cain don’t get on at all. Last year, Priya found out her fiancée Al had been cheating with Cain’s daughter, Debbie Dingle.

Debbie had no idea the two were together and when Cain found out what Al had done, he was furious.

Recently Al bought shares in the Woolpack, but it’s become clear he has plans to get rid of the pub to build new flats.

In last night’s scenes (Tuesday, December 14) Al sabotaged Marlon’s promotion by changing it to say that customers get a free bottle of champagne instead of a free single glass.

Harriet and PC Swirling came into the pub and Marlon explained the error and both were understanding.

However when Al stepped in, Chas was pushed too far and threw a bottle of champagne against the wall, declaring the promotion over.

Read more: Emmerdale: what happened between Marlon and Al?

When Cain got wind of Al’s latest antics he confronted him outside of the pub.

He began to threaten Al but PC Swirling soon stepped outside and warned Cain to stop, or he’d take him down to the station.

Al then called Cain and Chas ‘witless’ and ‘beaten.’ But fans have called for Cain to sort him out.

C'mon Cain get back to your old self after the clowns at EDHQ tried to ruin his character, sort out that wazzock Wooden Al.#Emmerdale

It has been revealed that a devastating fire will rip through the Woolpack on Christmas Day.

Will the fire ruin Al’s plans or could it work in his favour?