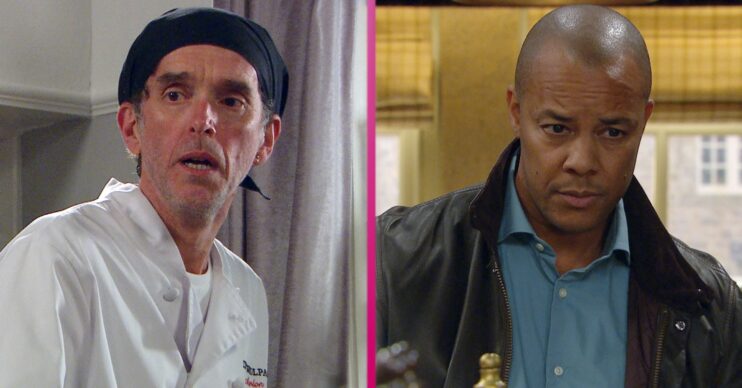 Emmerdale: What happened between Marlon and Al?

Marlon and Al's feud has been going on since Al arrived

Emmerdale characters Marlon and Al have made it no secret that they dislike each other, but what happened between the two men?

In tonight’s episode (Monday, December 13), Marlon mentioned to Belle that Al took his wife away from him and now he’s after his career.

But when did the feud between Al and Marlon begin?

In 2018, Marlon began dating Jessie Grant and they married on Christmas Day 2019.

However in August 2019, Jessie’s ex-husband and Ellis’s father, Al, turned up in the village.

Meanwhile Jessie and Marlon’s relationship faced a rocky patch when she considered taking a teaching job in Dubai.

After an argument with Marlon, Jessie cheated on him by sleeping with Al.

Jessie regretting sleeping with her ex and confessed to Marlon, leaving him crushed.

She insisted she loved him, but Marlon took his ring off and told her their marriage is over.

Realising he wasn’t going to change his mind, Jessie decided to take the job in Dubai and left the village saying an emotional goodbye to Marlon and April, who she had grown close to.

While Jessie no longer lives in the village, Billy and Ellis stayed living with Marlon as they had also grown close with April and saw her like a sister.

When Marlon got back together with his ex Rhona, he moved into hers with April. He then rented his house to Billy, Ellis, Ryan and Mack.

Marlon, Al and Ellis in lockdown

In lockdown, Marlon and Al ended up staying together along with Ellis.

During this time, he opened up about the fact he was adopted and didn’t have a relationship with his adoptive parents or birth family.

It seemed like Marlon may be starting to forgive Al for what happened, however he’s continued to mess with the Dingle family.

Viewers saw Al get into a relationship with Priya Sharma and the two got engaged.

However it was revealed that he had also been having a secret relationship with Debbie Dingle, Marlon’s cousin.

Both women found out about his cheating and dumped him.

During this time, Chas found herself growing close to Al, which caused problems with her relationship with Paddy.

Recently Al brought shares in the Woolpack and has made changes to reduce costs.

However it has become clear he wants to get rid of the pub to make way for new development, further upsetting owners Chas and Marlon.