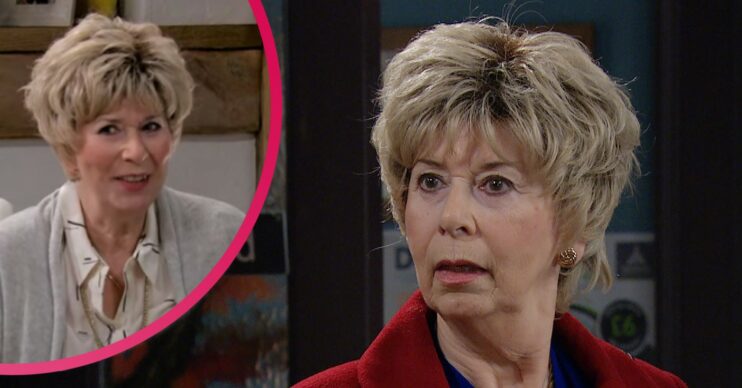 Diane is leaving after 22 years

Emmerdale said goodbye to Diane Sugden tonight (Friday, October 29) as she left the village to go and live in Portugal.

Over the last couple of weeks Diane has been planning to move to Portugal with pregnant granddaughter Gabby and daughter Bernice.

In last night’s scenes (Thursday, October 28) Gabby, Bernice and Diane planned to leave the village while Kim was at the police station. However Gabby went into labour.

She gave birth to her son in Home Farm living room.

In tonight’s episode, Gabby returned from hospital. She decided she was going to stay in the village, but Gabby wanted to stay behind.

Diane went to pay Kim a visit and Kim swore to Diane she never hurt Andrea.

She also said she wanted her grandchildren.

Diane told her Gabby doesn’t want to leave, but if she persuaded her, Gabby would leave.

Diane told Kim if she wanted Gabby to stick around and wanted to get to know her grandson, Thomas, she needed to do a few things.

First of all, she needed to put 20% of everything she had in Gabby’s name.

Diane also told Kate to drop the idea of her having custody of Thomas if anything every happened to Gabby.

She told Kim that she needed to learn to share everything.

Later Diane told Gabby, Bernice and Laurel the deal and told Bernice she needed to stay in the village.

Soon Diane packed her bags into the car and said goodbye.

Gabby, Bernice, Victoria, Marlon, Chas, Faith, Nicola, Rodney, Eric and Laurel all came out to say their goodbyes to Diane.

Diane had something to say to everyone and introduced everyone to her great grandson, Thomas.

Diane burst into tears as she drove away and her family and friends waved goodbye.