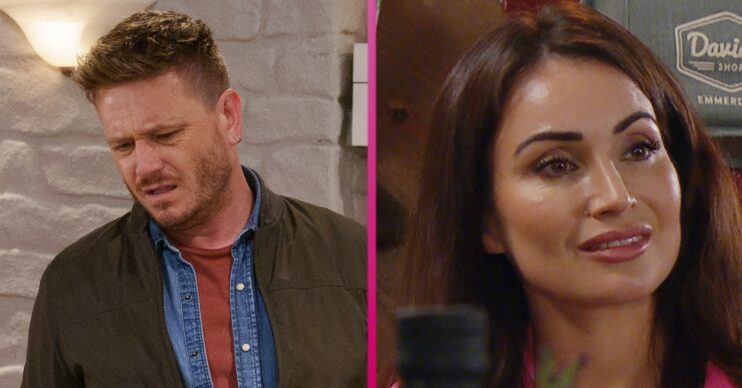 Emmerdale: David to blackmail Leyla over the drugs to solve his money problems?

Will David use this information against Leyla?

An Emmerdale fan theory suggests that David will blackmail Leyla now he knows about her cocaine addiction.

This week David walked into Take A Vow and discovered that Leyla was about to take cocaine.

David has been struggling for money since the pandemic took a hit on his business, but fans think he could end up blackmailing Leyla.

Read more: Emmerdale: How many times has David Metcalfe been married?

Months ago it was revealed that Leyla had been doing cocaine with Suzy Merton.

Suzy, who was an events planner, began working with Leyla at Take A Vow. Suzy also began a relationship with Vanessa Woodfield, who works as a vet in the village.

However when Suzy discovered Moira is the mother of Holly Barton, she revealed to Leyla she knew Holly, as she employed her to take photos at the weddings she organised.

Eventually Suzy realised that the day Holly died was the same day she gave Holly money to buy cocaine.

Holly used Suzy’s money to buy heroin and when Suzy found out she was furious.

Later Holly died of an overdose.

When Vanessa found out about Suzy’s connection to Holly she told Moira.

Vanessa broke up with Suzy and all of Moira’s friends were disgusted with her.

This week, David caught Leyla about to do a line of cocaine in Take A Vow.

She desperately tried to make excuses but David realised she was struggling.

He wanted to tell her husband Liam, who is a doctor, so she could get the help she needs.

However Leyla begged him not to say anything.

Now some fans think that David will blackmail Leyla with her secret.

One fan wrote: “This could be the perfect blackmail storyline now David’s got some dirt #Emmerdale.”

Another tweeted: “#Emmerdale now will David do the right thing and tell Liam or…”

#Emmerdale now will David do the right thing & tell Liam or…..🙄🤣

Will David tell Liam the truth, or will he cover for Leyla?