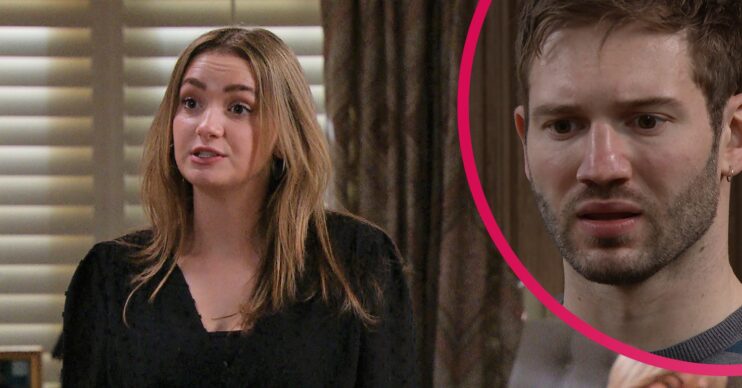 Emmerdale character Jamie has been presumed dead for weeks, but is he watching Gabby and his newborn son, Thomas Tate?

Last month, Jamie crashed his car into a lake outside of the village. Although his body was never discovered, everyone has presumed he died.

However Jamie’s mum Kim is adamant her son is alive.

After Jamie’s car accident, his ex-wife Andrea, who is the mother of his daughter, Millie, was killed.

Viewers know she was murdered by Meena Jutla and although police know Andrea’s death wasn’t an accident, they don’t know who killed her.

This week, Andrea’s boyfriend, Charles, suggested she throw a memorial in order to help Millie.

However Gabby was worried when Kim said the memorial may bring Jamie back.

Last night (Tuesday, November 2) Kim helped Charles pick a photo for the memorial. Charles liked the photo of Andrea and Millie but Kim chose the one of Andrea by herself.

Later Gabby went to see Charles at the church and told him to pick the photo he wanted for Andrea’s memorial.

However it soon became apparent that someone was watching from the bushes.

As Charles went back into he church, Gabby turned around to look at the bushes, clearly feeling like someone was watching her.

Although she didn’t see anyone, viewers saw a blurred figure walking away from the bushes. But who was it? Could it be Jamie, or is it someone else?

Fans seem to think it is Jamie.

Someone stalk Gabby. Might be Jamie? Who knows #Emmerdale.

Jamie was definitely hiding in those bushes #Emmerdale

Emmerdale: What’s next for Kim?

Later this week, Kim waits for Jamie to arrive at Andrea’s memorial. A car shows up late to the memorial and Kim hopes it’s her son.

However it turns out to be Andrea’s mother, Hazel. Hazel has some news for Kim, but how will she take it?