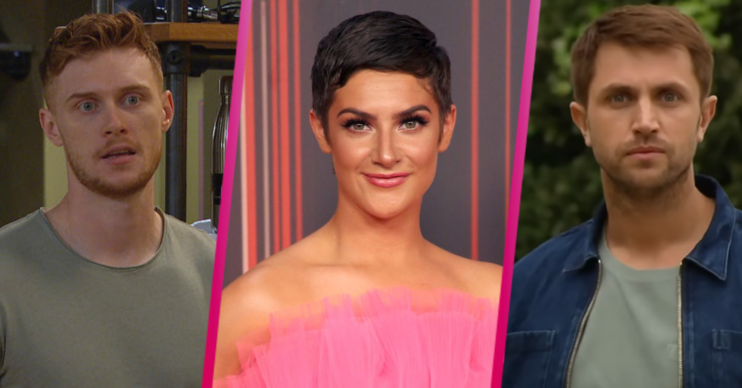 From soap stars to zoo keepers

The actors are known as Victoria Sugden and Luke and Lee Posner in the ITV soap.

But this weekend they swapped their glamorous lives for a more down-to-earth job – as zoo keepers at Chester Zoo.

What did the Emmerdale cast members say about their new role?

The three shared pictures from their day on social media showing them eating breakfast with the lions and feeding the giraffes.

Victoria even managed to reunite with former co-star Adam Thomas’ twin Scott on the day.

The famous faces most certainly looked the part for their animal encounter.

The trio donned blue overalls and beaming smiles as they got to work.

And, with their experience of farm life in the Yorkshire Dales, we don’t reckon there could be anyone better suited to the job!

What else have they been up to?

Earlier this month, Max and Kris revealed they had been volunteering on their days off at a COVID vaccination clinic.

The two actors selflessly sacrificed their weekend to help others during the pandemic.

Max shared the photo to his Instagram story, with the snap showing the couple with their arms wrapped around each other.

They are both dressed in full PPE complete with masks and medical gloves.

He captioned the post: “Volunteered today at the vaccine clinic! NHS are the best!”

The couple’s relationship is clearly going from strength to strength as they later celebrated their good deed with a night out.

Max and Kris met on the set of Emmerdale where they played brothers Lee and Luke Posner.

Although they never shared a scene on-screen, off-screen they clicked and went on a series of dates.

At the time, a source revealed: “They met on Kris’ last day of filming and just hit it off.

The insider added that it was “early days” but the pair were “really enjoying themselves and who knows what the future holds”.

Last year, they moved in together into a luxury apartment in Manchester.