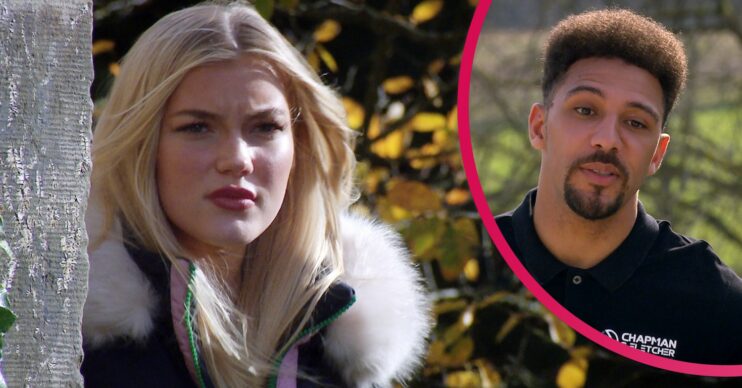 Emmerdale fans have a new theory that Billy Fletcher will be blamed for Leanna Cavanagh’s death.

Over the last few weeks, teenager Leanna has been spending time with personal trainer Billy. She ended up making a move on him, even though she was dating Jacob Gallagher.

Although Billy made it clear to Leanna that he wasn’t interested in her, word has spread around the village that she fancied him and people began to tease him over Leanna’s crush.

Earlier this week, Meena discovered that Manpreet had given Liam her old travelling rucksack to give to Leanna.

However Manpreet had no idea that Meena had some possessions hidden in the rucksack.

Meena went to Leanna’s house to get her belongings back, but Leanna had already discovered Meena’s ‘bits box.’

When Meena demanded Leanna return the rucksack, she emptied it out to find the stolen Pride collection tin.

Leanna then decided to go through Meena’s ‘bits box’ and found the article about the suspicious death of Nadine Butler.

Meena revealed Nadine was her best friend, but when Leanna quizzed her about her death, Meena let slip she killed her.

Leanna made an attempt to flee from Meena with the collection tin and box. However the teenager ended up twisting her ankle.

On the bridge Meena caught up to Leanna. The teenager said she would keep quiet about Nadine’s murder, but Meena pinned her to the ledge of the bridge.

Emmerdale: Fans think Billy will be blame for Leanna’s death

When Leanna grabbed her hair, Meena pushed her off the edge.

However fans have a theory that Billy will be blamed for Leanna’s death, as he was growing fed up with people teasing him over Leanna’s crush.

Could Billy or even Jacob actually end up being potential suspect's in Leanna's murder? If it's Billy he's going straight back inside given his history. Maybe Jacob will be the one to find her given he went looking for her later after brutally rejecting her yet again? #Emmerdale

#Emmerdale Will Meena murder Leanna? If she does, Dan saw Billy talking to Leanne so will Billy be inaccurately/prematurely referred to as:
"The last person to see her alive".
Will Jacob find her body & also becomes a suspect?
Brilliant storyline! Can't wait for next episode! pic.twitter.com/x9vtqp7546

I won’t be happy if Billy get blamed for Leannas Death if Leanna Dies!! 😬💔#Emmerdale @emmerdale

Emmerdale usually airs weeknights at 7pm on ITV, with an extra episode at 8pm on Thursdays. However this week’s episodes are now available on ITV Hub.

What did you think of last night’s episodes? Leave us a comment on our Facebook page @EntertainmentDailyFix and let us know what you think!