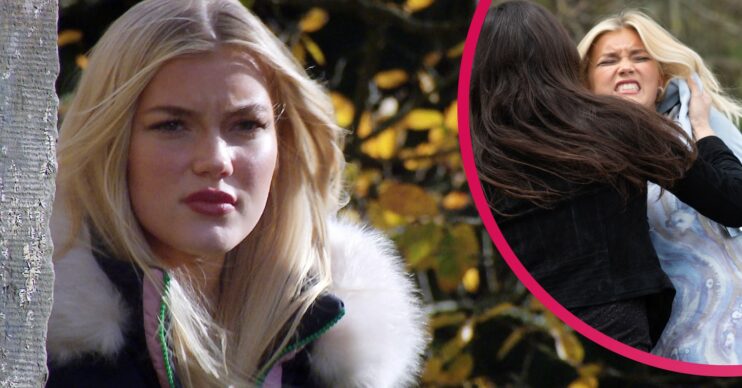 Emmerdale star Mimi Slinger has explained how Leanna’s death scenes were filmed with COVID-19 restrictions in place and reveals her future plans.

In tonight’s episodes of Emmerdale (Thursday, July 8) Meena tried to get her possessions back from Leanna.

However Leanna read the article in Meena’s box about the suspicious death of a woman named Nadine.

Nadine was Meena’s best friend. When Leanna began to ask Meena about Nadine’s death, Meena let slip that she “didn’t mean for her to die.”

Soon Meena chased Leanna out of her house in attempt to stop her revealing the truth.

Leanna ended up hurting her angle and on the bridge, Meena pinned her to ledge. However as Leanna grabbed her attacker’s hair, Meena pushed the teenager over the edge to her death.

Currently actors have to remain at a two metre distance apart due to Covid restrictions. However Mimi, who plays Leanna, reveals how she and Paige Sandhu, who plays Meena, were able to shoot the scenes.

When asked if it was difficult to film with Covid restrictions in place, Mimi said: “In order to film the scenes the best we could, we had to be closer than the social distancing rules would allow.

“Both Paige and I decided to form a ‘bubble’ and we had to isolate for a few days in a hotel and have regular Covid tests to make sure that we were okay prior to filming.

“I was allowed to bring my mum with me to keep me company – thank goodness!

“On the shoot days we were driven to and from set in a pre-fogged car, and had to stay in our dressing rooms unless on set and travel back and remain in our hotel rooms until the scenes were complete.

“I really feel it was necessary to make the scenes feel as real and raw as possible.”

She also revealed a stunt double was used to film Leanna falling off the bridge.

She said: “I did have to do a few stunts in order to film my exit which I seriously enjoyed! There was a stunt coordinator on set who was fantastic at guiding Paige and I.

“As I am pushed off the bridge to my death, falling 40 ft, that was going to be a bit too much of a challenge – a stunt double was used for that bit.”

What does Mimi have planned for the future?

When asked what’s next for Mimi, the actress responded: “Well this industry is very uncertain. I am very keen to pursue other acting opportunities. Fingers crossed for anything in the pipeline.

“I definitely want to keep acting, I absolutely love it and can’t see myself not doing it! I would love to do something with my music too, as I am a singer and songwriter.

She added: “I also have recently started modelling and have already done some fantastic, fun jobs. I do love it and am learning a lot.”

Emmerdale usually airs weeknights at 7pm on ITV, with an extra episode at 8pm on Thursdays. However this week’s episodes are now available on ITV Hub.

Will you be watching the next episodes of Emmerdale?