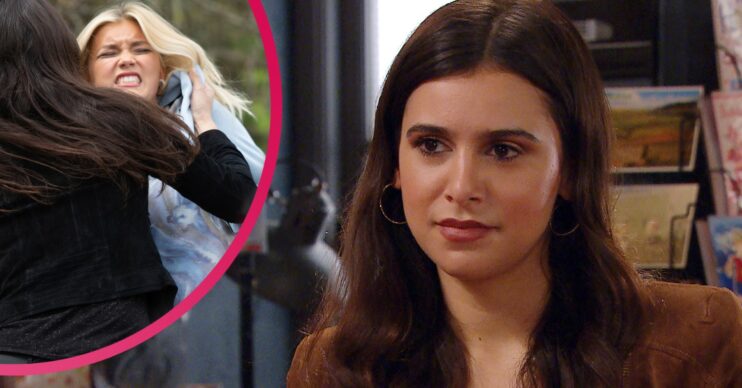 It was the most fabulous, shocking, gripping week of episodes

Meena killed Leanna in this week’s Emmerdale and entered the history books as the latest murderer to stalk the soaps (move aside Gray Atkins!).

Meena killed Leanna after she got too nosy

Intrigued, Leanna rifled through the box, unearthing Princess’s squeaky toy, along with other keepsakes. Meena claimed she was a petty thief who stole whatever she fancied. But given what she did to little Princess, we’re wondering if her box was full of trinkets pinched from previous victims?

When Leanna uncovered the newspaper cutting about Meena’s former best-friend Nadine Butler, she suddenly looked scared. And when Meena wailed “I didn’t mean for her to die” Leanna – wisely – took her chance to leg it.

The brave birthday girl ran through the graveyard, but Meena caught up with her at the humpback bridge and after fessing up to killing poor Nadine, she threw Leanna over the bridge and into the river.

“Oops,” she said as Leanna plunged to her death.

Here’s what we thought was so brilliant about this week’s heart-stopping, heart-breaking episodes:

1 Meena is the most wonderful pantomime soap villain

Meena’s a stone-cold psychopath. Her sigh of frustration when she realised Leanna wasn’t quite dead. Her little hint of a smile at Liam’s anguish.

The way she switched from laughter to sinister threats. The raking of her fingers through her hair. The fabulous Paige Sandhu has created a monster – and we love her.

2 Leanna made the best, most tragic, victim

Poor Leanna had just turned 18. She was celebrating her birthday and about to start a new adventure. But that wasn’t the only reason for her death being so tragic.

Leanna’s arrogant side emerged as she reminded Meena that she worked for her dad, and teased her about not being Nadine’s actual bestie. Without meaning to victim blame, in a way, Leanna sealed her own fate.

3 The switch from comedy to high drama

At first, Meena’s pursuit of Leanna was funny. Leanna teetering through the cemetery on her new shoes and hiding behind gravestones. Meena saying it was like a giant game of battleships.

But it got sinister very quickly. And when Liam found out what had happened to his daughter, it went from tense to tragic. Basically, it yanked on every one of our heartstrings.

4 The way it reminded us of some classic soap murders

Did Meena remind you of anyone in this week’s episodes? We thought there were hints of Kathy Bates in Misery there, but most of all, we couldn’t help thinking of classic Corrie killer, Richard Hillman!

When Meena was lurking in the shop with a tin of beans in her hand, she reminded us of Richard Hillman pulling on his black gloves. But that’s not all. Her dancing to Britney Spears after she’d killed made us think of Corrie’s Tracy Barlow seducing Charlie Stubbs before she struck.

And – go with us here – even the way Leanna’s shoes led to her untimely demise reminded us of poor Barry Evans in EastEnders plunging to his death because of his shoelaces (well, his shoelaces and Janine Butcher). And the bridge-top location reminded us of Emma Barton meeting her maker at the hands of Moira Dingle!

5 How this is just the beginning!

We know Meena’s story is only just getting started. She’s killed before she murdered poor Leanna, and we’re confident she’ll strike again.

We can’t wait to see what she gets up to in the coming weeks and months. Who do you think her next victim will be?