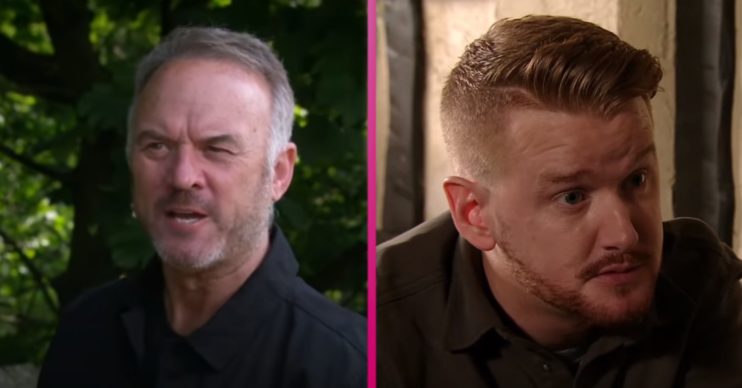 Last year, Gary Windass killed loan shark Rick Neelan. However the storyline has been revisited this year as Gary admitted to his ex-girlfriend Sarah he is responsible for the crook’s sudden disappearance.

Meanwhile in the Dales, Dawn ended up shooting corrupt copper DI Malone. For months Malone had been torturing Dawn’s dad Will and boyfriend Billy.

When Dawn discovered Malone and Will’s fiancée, Harriet, had been having an affair she went to the police. Furious, Malone tried to get Dawn to kill herself by overdosing on heroin.

However it was the dodgy detective who ended up being killed off.

But it looks like fans aren’t impressed with the storylines.

#Emmerdale Are we to assume Malone's going to end up buried in the woods? How much more ridiculous are these storylines going to get?

And so the same storylines as @corrie continue. They're going to bury Malone's body next to Rick Neelans! #emmerdale

It hasn’t been revealed how long the plots will go on for. However we don’t suspect they will be over soon.

In Emmerdale, Harriet and Dawn are trying to cover up Malone’s death. But it may be difficult as actress Olivia Bromley, who plays Dawn, has revealed she doesn’t think Dawn will cope well with the secret.

Although Sarah originally planned to go to the police, Gary ended up saving her life and she decided to keep quiet. However keeping the secret has caused problems with her husband Adam and he has since told her their marriage is over.

Although Gary married Maria, he also confessed he was still in love with Sarah. Will Sarah and Gary end up getting back together over this secret? Will the truth come out?

Emmerdale airs Monday, Wednesday and Friday at 7pm on ITV. Emmerdale is followed by Coronation Street at 7.30pm.

What do you think about the soap’s murder plots? Leave us a comment on our Facebook page @EntertainmentDailyFix and let us know what you think of this story.