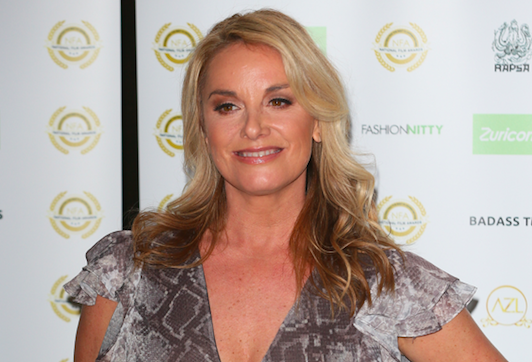 Tamzin Outhwaite fans might be gutted she’s leaving EastEnders, but they won’t have to wait too long to see her on TV again.

The actress, 48, is due to depart Albert Square any day now – although she actually finished filming in September.

After posting an emotional message on Twitter about leaving the soap, she clearly wasted no time at all finding a new role.

On Wednesday (October 2), Tamzin shared the news that she’s been filming on popular BBC crime drama Shakespeare and Hathaway.

It must have felt like a home from home, as she co-starred opposite fellow former EastEnder Jo Joyner!

Sharing a photo from what looks like a very cold day filming, Tamzin wrote: “Last day on set with a gorgeous cast and crew @dollyjj #MarkBenton… #shakespearescounty #shakespeareandhathaway #coatofdreams @charlottebaillieu.”

Her followers were quick to comment on her new role, including Jo herself who replied: “We’ve loved having you.”

In fact, Jo’s Walford character Tanya Cross and Tamzin’s Mel Owen only crossed paths for a matters of weeks on the soap – in early 2018.

So that’s it! The end of an era… for me at least. Melanie Healy/Beale/Owen has left the building… it’s been a pleasure , a privilege and a 21 year association with a family I will cherish forever and never forget….TIL next time my beautiful cast and crew… you all rock.❤️

Jo then left in 2013, but returned for a short stint, which ended in February 2018, just a month after Tamzin rejoined the soap!

Since leaving the BBC soap, Jo has appeared in Ackley Bridge, and currently stars as private detective Luella Shakespeare in Shakespeare and Hathaway.

It’s not yet been revealed what role Tamzin will be playing.

In September, Tamzin marked her last day of filming EastEnders with a tweet which read: “So that’s it! The end of an era… for me at least.

“Melanie Healy/Beale/Owen has left the building… It’s been a pleasure, a privilege and a 21-year association with a family I will cherish forever and never forget… Until next time my beautiful cast and crew… You all rock.”

Her exit will involve a high-speed car chase with her blackmail victim Sharon Mitchell.

Will you be sad to see Tamzin Outhwaite leave EastEnders? Leave us a comment on our Facebook page @EntertainmentDailyFix and let us know what you think!