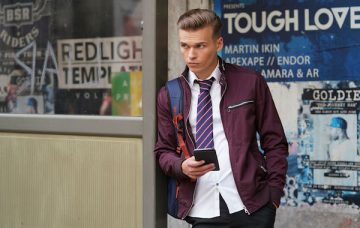 Fans question whether Hunter is the worst EastEnders character ever

Hunter Owen has been causing havoc in Walford this week, after being at the centre of the dramatic pub siege plot – after which one unlucky punter won’t make it out alive.

As one Albert Square resident will be leaving in a coffin, some are hoping it’ll be Hunter – and not necessarily for the reasons you’d think!

It’s true, Mel’s son has attracted hundreds of enemies after threatening to take out fan favourite Jack Branning, but some viewers have hated Hunter all along.

In fact, there are several who believe he’s the “worst character ever” to have been in the BBC soap!

Read more: EastEnders viewers desperately want Keanu and Sharon to get back together

Writing on Digital Spy Forums, one soap fan said: “Is Hunter the worst EastEnders character ever?”

One user replied with an affirmative, typing: “Hunter is just an irritant and mummy’s boy.”

Another said: “I think there have been worse characters in the past, but what I can’t forgive is the fact that Mel, who was a good character first time around, was subsumed into this obsessive, Oedipal thing with him…

“I can understand the mother/son relationship and that she is protective but, to be honest, Hunter had no redeeming qualities and it made them a bit creepy!”

A third agreed, saying: “He’s right up there with Bianca and Kat.”

Others admitted that while Hunter IS annoying, there’s been worse. Can you guess?

“He’s an awful character, but he’s nowhere near as bad as the likes of Hayley and Aidan,” said one more.

Some fans nominated Cora’s grandson Dexter Hartman, with one saying: “He said ‘oh my days’ after every sentence.”

One fan hoped the BBC soap would keep Hunter around for “eye candy”, while another wrote: “I think Hunter seems worse than he actually is because there were such high expectations about the son of Mel and Steve, two absolutely fantastic characters.

“I blame the writing and storylines he was involved in, I don’t think the actor is that bad – there are much worse offenders in the current cast (Big Mo, Keanu, Karen and Honey leap to mind).”

Who is your worst and best soap character of all time? Leave us a comment on our Facebook page @EntertainmentDailyFix and let us know what you think!