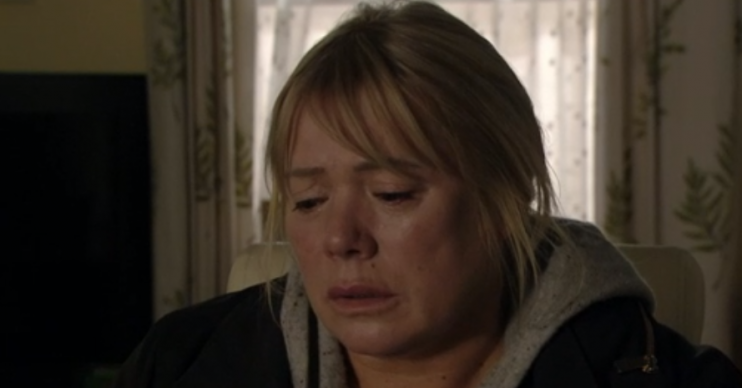 Viewers of EastEnders have been left heartbroken after Sharon Mitchell tried to take her own life.

In last night’s episode (Thursday February 27 2020) Sharon took her baby over to Karen Taylor, who is the baby’s paternal grandmother.

Karen quickly noticed that Sharon packed a lot of nappies and joked Sharon was going to run off and leave the baby with her.

However it turns out Karen was onto something as later Sharon went back to the Mitchells’ home, where she once lived.

She looked at pictures of Dennis and took out a bottle of pills from her bag.

She left a note for Ian and prepared to end her life.

Meanwhile at the Beales’ house, Kathy asked Ian what happened to all the pills in the medicine cabinet.

Realising Sharon must have taken them, he rushed over to Phil’s place but as he got there Sharon ripped up the note and told her friend she couldn’t do it.

Viewers were left heartbroken for Sharon and praised actress Letitia for her performance.

Afterwards, Ian tried to encourage Sharon to be strong for her new son, but Sharon confessed she didn’t want her newborn and wanted Dennis.

Ian also broke down in tears saying he should have died on the boat but Sharon told him it wasn’t Ian’s fault Dennis drowned.

However, she has no idea what Ian has been hiding…

Before the boat crashed, he got into an argument with Dennis after finding out he was behind Bobby Beale’s online abuse.

Ian locked Dennis in a room on the boat’s lower deck so he could take him to the police after the party finished.

Before the boat crashed, Dennis left Sharon a voicemail tell her what Ian had done saying he needed help.

The boat went on to crash and the lower deck started taking on water.

Despite Ian managing to get Dennis out of the room and help him, a surge of water caused Dennis to drown.

Will Sharon listen to the voicemail? And will Ian tell her about his clash with Dennis?