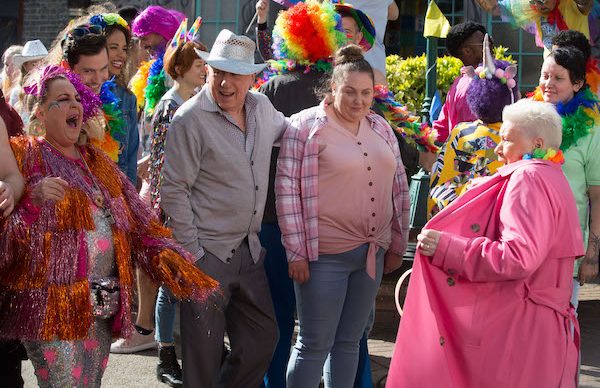 Walford is awash with colour as Pride hits EastEnders next week, but not everyone is in the mood to party…

EastEnders went down in history recently by opening the first ever gay bar in soap… but it’s not just the Prince Albert that has got the Walford LGBT community in the mood to party, because Pride fever has also hit.

Tina Carter has been busy putting together the final touches for Walford’s Pride… and there’s not a detail that has been missed.

Next week she even ropes Whitney Dean into making special t-shirts for the Pride event at the Price Albert, and poor Callum, who is still very much in the closet, is forced to model them, much to his horror.

But when the day of Pride arrives, wearing his girlfriend’s t-shirts is the least of Callum’s worries when he is also roped in to working on the bar at the Prince Albert.

As Callum struggles to get into the spirit of things as he hides his huge secret about Ben, across the Square, things also aren’t easy for Bernadette Taylor.

The teenager is set to have her heart broken once again by best friend Tiffany Butcher when she discovers she has been posing online as Sophia, Bernie’s new love interest that she has met on a dating app.

Bernie is devastated that Tiffany would make up a fake profile and start messaging her, and as Pride arrives, she is definitely not in the mood to party.

As Bernie heads out for her first ever Pride, Tina spots her at the bar looking lost and decides to offer her some friendly words of wisdom.

With her friends and family around her, Bernadette starts to get into the party spirit and later Tina is thrilled to see the teenager enjoying the celebrations.

Callum’s world comes crashing down when Stuart reveals he saw him kissing Ben the night before…. but is he going to keep his brother’s secret safe?

How long before Whitney finds out the truth about Callum and Ben now that Stuart knows?

Do you think Callum’s secret is safe with Stuart? Leave us a comment on our Facebook page @EntertainmentDailyFix and let us know what you think!