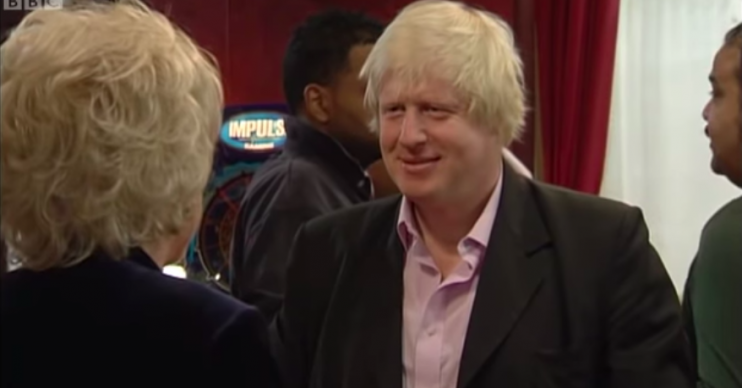 Boris Johnson once made a cameo appearance in EastEnders – and there are pictures to prove it.

The politician is running to be the country’s next Prime Minister but just a decade ago he was the Mayor of London and made an appearance in the London-set soap opposite Peggy Mitchell.

In the brief scene, Boris tried to chat up Walford legend Peggy in front of her horrified daughter Sam and niece Roxy.

Peggy told him: “Oh, it’s such an honour to have you here, Mr Mayor.”

“Please, call me Boris,” he replied.

Giggling Peggy then purred at him: “Lucky for me that your bike got a puncture, isn’t it? Now, would you like a top-up?”

But BoJo turned down an extra head to his beer telling her: “No, I’m fine, thank you.”

Meanwhile Sam and Roxy watched on in horror, muttering: “Unbelievable.”

Sam added: “So much for giving him what for.”

The weird scene continued with Peggy gushing over Boris in the controversial bit, telling him: “I do so admire a man who devotes his entire life to serving society. I nearly went into politics myself, you know.”

Handing over his business card to Peggy, he replied: “Oh really? Well, if you have any ideas for how I could help Walford, here’s my card.”

Peggy then told him: “Ooh, I wouldn’t dream of telling the Mayor of London what to do. Thank you so much.”

The scene was hit with a backlash when it aired in 2009 with it coming just days before the Conservative Party Conference.

It also emerged the soap had turned down the opportunity for the previous Mayor, Ken Livingstone, to appear, forcing the BBC to have to defend its decision to feature Boris.

And now he could be the next Prime Minister.

Do you remember Boris’ EastEnders debut? Leave us a comment on our Facebook page @EntertainmentDailyFix and let us know what you think!