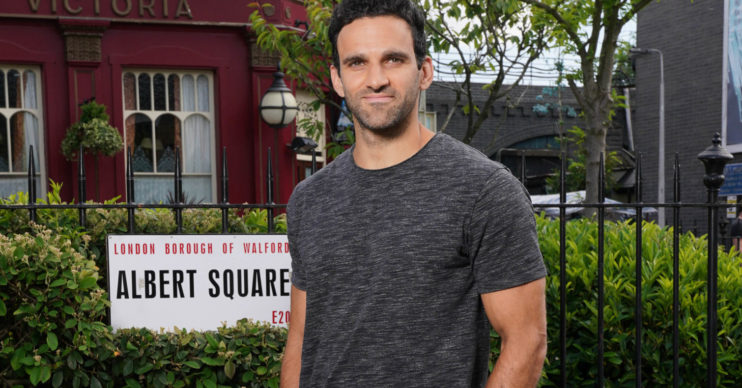 EastEnders will ‘reset’ when it returns reveals Davood Ghadami

The show will move on after lockdown

EastEnders is going to undergo something of a ‘reset’ when it returns in September, star Davood Ghadami has revealed.

The actor plays Kush Kazemi in the BBC soap and he has teased the upcoming return.

Speaking on EastEnders’ Secrets from the Square he said: “On a personal level, I’m really looking forward to getting back around my friends and colleagues.

“And also being able to see where the storylines go from here, how the people of Walford live in the new world, and how the storylines pick up from where we left off.

“It’s all a very intriguing time, almost to reset what Walford is and how the characters interact and relate.”

The actor will appear alongside co-star James Bye

He added to Stacey Dooley: “I get to sit in my dressing room opposite James’s dressing room, with our doors open – more than two metres apart of course.

“And just have a chat, so getting back to some kind of normal and extracurricular interactions will be great.”

When will EastEnders return?

EastEnders only resumed filming earlier this week – and the cast were kept in the dark about storylines until the last moment.

It is not due back on air until September.

Actress Kellie Bright has revealed how she and her co-stars didn’t know what will happen to their characters.

Speaking about returning to filming, Kellie told Inside Soap: “I feel very grateful that I have a job that is going to start again, I know it’s going to be challenging.

“I’m looking forward to seeing the people that I work with, and I’m kind of intrigued – at the moment I have no idea what lies ahead.

“I know that we will be living in a very different world after living through coronavirus, and we’re honouring that which is really important but it’s going to be very very different.”

She said it’s going to be a “new challenge for my brain”, which has “literally gone to sleep for the last few months”.