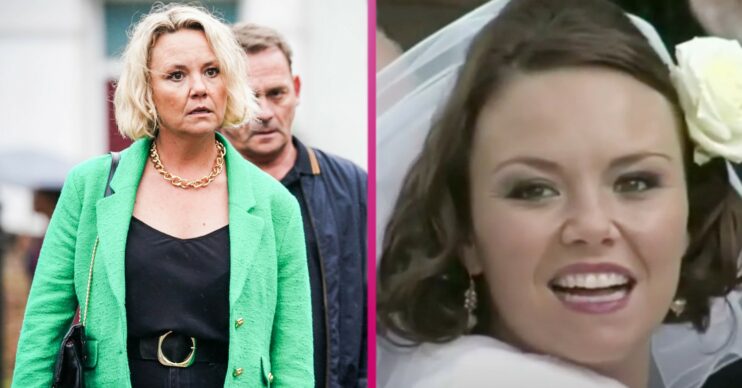 EastEnders: Why has Janine come back as Judith Bernstein and when did she use her before?

Zack had taken his nephew Albie to an appointment. The doctor came in and introduced herself as Dr Judith Bernstein. However viewers recognised her immediately as Janine.

Fans were baffled by Janine’s return and why she was now pretending to be a doctor.

why is janine pretending to be a doctor? i can only think she wants her daughter back and is going to search for her address on patient records? #eastenders

So why is Janine going by another name, and has she used this identity before?

Who is Judith Bernstein in EastEnders?

This isn’t the first time Janine has done by Judith Bernstein.

In 2008, Janine returned to Walford for the funeral of her father Frank.

Pat and Ricky later discovered that Janine was masquerading as Judith Bernstein so she could marry a Jewish man named David for his money.

They manage to track Janine down to a synagogue just after she married David. Pat burst in and revealed Janine’s true indentity.

David ended up having a heart attack and dying.

Recently Kat Slater was shocked to discover her son Tommy had been in contact with Janine’s daughter, Scarlett Butcher, who he believes is his cousin.

Tommy revealed Scarlett is living in foster care and wants her to come and live with them.

However Kat wasn’t keen on Scarlett coming to live with them, as she feared Tommy would find out the truth – Alfie Moon isn’t his father, Scarlett’s father, Michael, is.

Kat decided to tell Tommy the truth, that Scarlett is his half-sister, but this made him even more determined to look after her.

Kat decided to go down to the courthouse and tell the social workers she wants to be Scarlett’s carer.

What’s next for Janine?

This week Kat is about to tell Scarlett about Tommy when Janine arrives.

She lays it on thick, giving testimony about how she’s redeemed herself over the years.

Later Janine rocks up at The Vic bold as brass and wastes no time in telling locals what she thinks of them all.

Kat is more determined than ever to get Scarlett away from her reckless mother.

Phil and Kat are frosty as he’s not keen on her getting involved with Scarlett as Billy tries to stick up for Janine, much to Kat’s annoyance.

Kat is sure that Janine has taken Scarlett and Billy desperately tries to reach her.

Lola realises Tommy is upset and Kat promises that they’ll find his sister.

Billy gets a text from Janine and they meet up to say goodbye, she’s give up hope on Scarlett and wants to leave Walford.

Billy tells her Scarlett is missing, it’s clear that Janine has no idea.