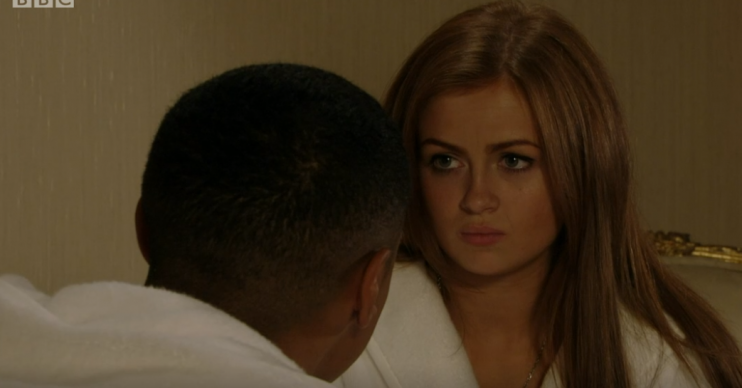 Keegan and Tiffany have been together a couple of months

Viewers of EastEnders have been left shocked by Keegan Baker’s proposal to Tiffany Butcher.

In last night’s episode (October 14 2019) Keegan and Tiffany managed to get their hands on a free hotel room.

Earlier in the episode the pair had discussed having sex and when they got to the hotel room, Tiffany and Keegan decided they were ready.

Read More: Shane Richie reveals he could return to EastEnders in 2021

Afterwards, they ordered food to their room and Keegan told Tiffany the hotel worker said: “I hope you and your wife have a wonderful stay,” and the pair laughed at the comment.

The couple then got onto the discussion of young marriage and how Gray and Chantelle married at a young age.

Keegan, who recently celebrated his 18th birthday, then got down on one knee and proposed to his girlfriend.

Tiff, who is only 16, accepted his proposal and the pair looked extremely happy.

However, viewers were shocked by and think it’s too soon for them to be getting married, as they have only been together a couple of months – and they’re both so young.

#Eastenders Tiffany and Keegan planning on getting married already… pic.twitter.com/GI4pOPR98N

Haha who’s writing this? Keegan and tiff just suddenly being like let’s get married!!!! 🤦🏻‍♀️😝 #eastenders

Pictures of the wedding emerged last month, which saw the wedding in jeopardy when they’re late turning up and the registrar refuses to marry them.

What do you think of Keegan and Tiffany’s engagement? Leave us a comment on our Facebook page @EntertainmentDailyFix and let us know what you think!