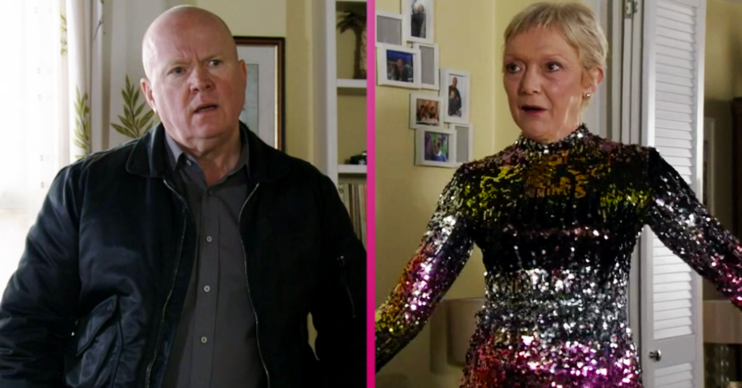 Jean wanted to try and bring her daughter home

EastEnders viewers were left in a state of ‘cringe’ as Jean Slater tried to seduce Phil Mitchell in last night’s episode (Tuesday, May 26).

Last year, Jean’s daughter Stacey attacked Phil in order to stop him from hurting her husband Martin. Phil’s son Ben found out what Stacey did and told her to leave Walford.

Over the last few weeks, Jean has been struggling with her mental health and desperately wants to see Stacey.

In last night’s episode, Jean planned to leave Walford to visit her daughter. But knowing she isn’t well, Shirley managed to stop her and took her for a cup of tea in the cafe.

Jean told Shirley it was because of Phil that Stacey couldn’t return and wanted to know how to get through to him. Shirley told her friend that Phil only thinks women are only good for one thing.

Shirley assured Jean she would speak to Kush about contacting Stacey.

But Jean took matters into her own hands and used what Shirley told her to try and seduce Phil.

After sneaking into the Mitchells’ home, Jean proposed to Phil that she would sleep with him in return for Stacey being allowed to come back without repercussions.

Knowing something isn’t right with Jean, Phil made a call to Shirley. However viewers were left ‘cringing’ at the scenes.

This Jean and Phil scene is just too much #eastenders

Me watching Jean strut over to Phil’s in that glitzy dress to seduce him #Eastenders pic.twitter.com/gtitto9GnT

When Shirley arrived at Phil’s, she took Jean home. After failed attempts to contact Stacey, Kush finally received a call from her.

Jean and Phil had me cringing so hard.

But when she asked after Jean, Kush told Stacey that things were fine. Will he eventually tell Stacey the truth about Jean? Will we see her return to Walford soon?

What did you think of the Phil and Jean scene? Leave us a comment on our Facebook page @EntertainmentDailyFix and let us know what you think of this story.