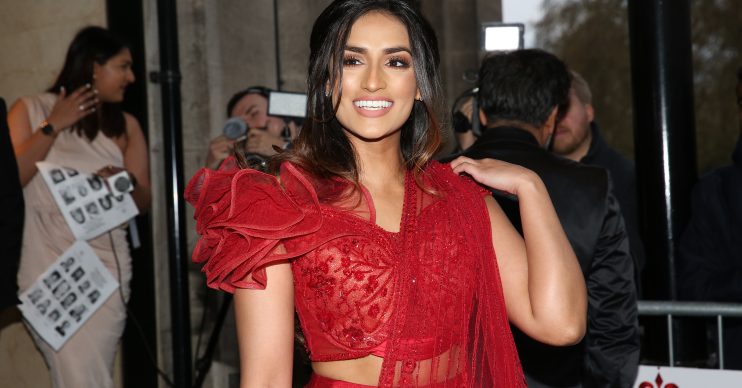 The actress plays Habiba on the BBC soap

Rukku Nahar, who plays Habiba Ahmed, in EastEnders has shared a stunning holiday picture to her Instagram account.

Looking gorgeous posing in a red bikini, the steamy snap has definitely got temperatures rising even higher on the hottest day of the year!

Rukku is sunning herself in Marbella and shared the shot to her 38k followers.

Fans were stunned by the picture, with many commenting fire emojis.

One said: “Oh my God, I didn’t even recognise you!”

“Which part of Albert Square was this picture taken in?” another jokingly asked.

Another added: “I’m starting to not blame Adam for cheating on Honey,” referring to Rukku’s current storyline on the soap.

For weeks, Habiba has been having an affair with dentist Adam Batemen, who also happens to be her grandparents foster son.

The pair have been seeing each other behind their family – and his girlfriend Honey’s – back.

Last week, the pair were getting intimate at Adam’s house and viewers were shocked by the X-rated scenes showing the pair in bed on top of each other, whilst Adam kissed Habiba’s neck.

That scene between Adam and Habiba was abit too steamy. #EastEnders pic.twitter.com/0iY9xkMmS1

tmi for this time of night eastenders Adam yuk #eastenders

The pair were interrupted when Jack came over asking if Adam could get the money for the flat, as Adam planned to buy it with Honey.

Jack looked surprised when Habiba came from the hallway in just a t-shirt.

However, Adam was quick to cover their tracks saying Habiba simply spent the night on the sofa after she went out and her grandparents would’ve kicked up a fuss because of what she was wearing.

Jack simply replied with: “By the end of the day”, referring to Adam’s decision.

After Jack left, Habiba wasn’t happy to hear Adam was buying the flat with his girlfriend saying to him: “I thought you were leaving her.”

Adam told her he was just stringing Jack along but Habiba wasn’t impressed.

A few months ago Billy, Honey’s husband who she is separated from, saw Habiba and Adam kissing and recently tried to tell her the truth, but she refused to believe him.

Billy even tried to tell Habiba’s grandparents Mariam and Arshad about their affair but they also didn’t believe him saying Adam is like a brother to Habiba.

Honey saw CCTV footage of Adam and Habiba sharing an intimate moment in the Minute Mart and confronted her boyfriend about it.

But of course, he had a reason and stated Habiba was upset about a guy and he was simply comforting her.