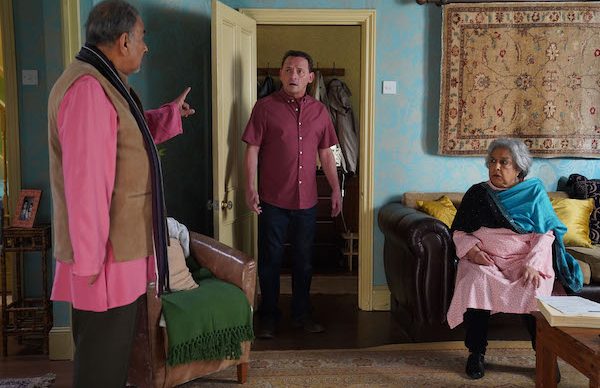 But the Ahmeds don't take the news well

God loves a trier and EastEnders Billy Mitchell is certainly that as he continues his relentless quest to expose Adam Batemen for the lying cheat he is.

Billy’s already told Honey that he caught Adam kissing Habiba Ahmed a few weeks ago, but Honey didn’t believe him and thought he was just trying to split her and Adam up.

Honey moved in with Adam and out of Billy’s house, but Billy remains determined to prove he wasn’t being vindictive and Adam is the baddie, not him.

Next week, struggling with seeing Adam so loved up with Honey, and knowing it’s all a facade, Billy takes drastic action.

As Honey wouldn’t believe him, he decides to break the news to Habiba’s grandparents, Mariam and Arshad, instead, in the hope they’ll do something.

However, it’s not the reaction Billy had hoped for when Arshad angrily demands Billy leave, also not believing a word he is saying.

It would be a difficult thing for the Ahmeds to take on board though, given they practically raised Adam and he’s known Habiba since she was a very small child.

After her husband kicks Billy out, Mariam finds Mr Mitchell’s words playing on her mind and decides there is only one course of action to stop the rumour mill: find a husband for Habiba.

Mariam heads off to fill Iqra in on the plan, but on her way she spots Adam and Honey together and her suspicions grow. Does Mariam believe Billy after all?

Wanting to get to the bottom of what’s going on, Mariam invites Honey and Adam over for dinner.

With Habiba likely to be in attendance too, can she and Adam keep their romance under wraps?

Will they be able to keep up the pretence in front of her family and discredit Billy once and for all?

Or does Honey have a nasty shock coming when she realises Billy was right?

What do you think of this storyline? Leave us a comment on our Facebook page @EntertainmentDailyFix and let us know!