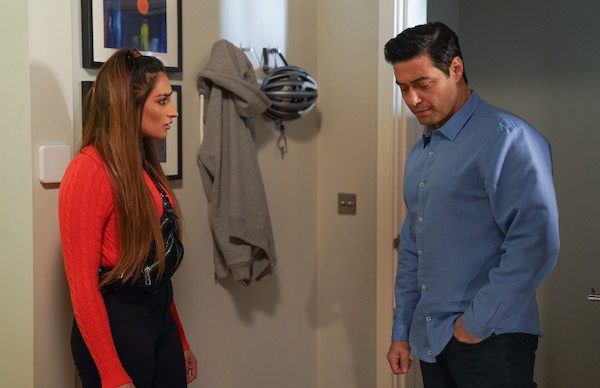 Is Honey about to have her heart broken?

Adam Bateman and Habiba Ahmed’s secret affair is on the brink of being discovered in next week’s EastEnders, but will it be Honey Mitchell who unearths the truth?

EastEnders fans have known that Adam is cheating on girlfriend Honey with old family friend Habiba for weeks, but it was only recently that Billy Mitchell of all people worked out the truth.

But instead of racing straight to Honey with the news, Billy knew she wouldn’t believe him and has been biding his time, waiting for the right moment to tell his ex that her new boyfriend is a cheat.

And it seems that time has finally come, as next week sees Billy plan to tell Honey everything, and as you can imagine, the news doesn’t go down well.

As Honey plans to move in with dentist boyfriend Adam after he landed them one of Jack Branning’s fancy new flats, next week sees her panicking about how to break the news that the move is now imminent.

But instead of trying to talk her out of leaving with his kids, Honey is surprised when Billy is accepting and understanding, throwing her entirely.

However, Billy has got a plan, and as he cooks a family meal to mark Honey, Janet and Will’s departure, it’s clear he is cooking up more than just a dinner.

Honey is suspicious when she arrives at the meal and finds it is just her and Billy there, but before she can work out why her ex has got her there alone, Billy blurts out that Adam is cheating on her.

But sadly for Billy, Honey doesn’t believe a word he says and thinks this is just another ploy to try and stop her leaving.

Honey is upset with Billy for trying to sabotage her relationship with Adam and leaves the meal to go and see Adam at their new flat. But what will she find when she arrives?

Meanwhile, Habiba is jealous that Honey is moving in with Adam and confronts him about their future together. But as she asks him to leave Honey, will he agree?

As Honey prepares to move in with Adam, Lola steps in and tries to make her see sense and points out that his isn’t something even Billy would lie about.

But Lola’s words fall on deaf ears and Honey’s relationship with Billy is at its lowest ever point… can he make Honey see sense before Adam breaks her heart completely?

Do you think Adam will ever leave Honey for Habiba? Leave us a comment on our Facebook page @EntertainmentDailyFix and let us know what you think!