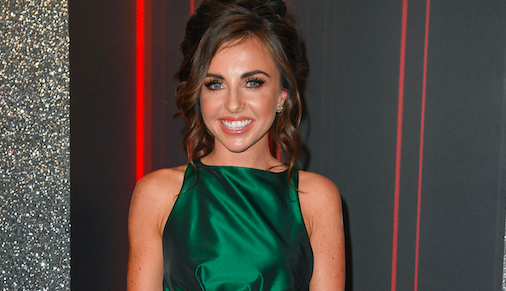 They got engaged in May

Louisa Lytton, star of EastEnders, has shared a beautiful photograph of herself with her fiancé Ben Bhanvra.

The actress, who plays Ruby Allen in the BBC soap, posted a rare loved-up picture with her handsome beau – a sundrenched holiday snap from their visit to the Maldives in May.

And Louisa has every reason to remember the sunny vacation fondly as it was where her then boyfriend Ben proposed.

I was so excited but my brain went into overdrive and I started freaking out.

On Tuesday (December 17), 30-year-old Louisa reminisced about their time away when she shared a photo of the pair surrounded by the straw-roofed huts of the luxury resort.

Louisa, in a simple green strappy summer dress, can be seen leaning into Ben’s chest as he kisses the top of her head.

And it’s clear to see the pair are seriously loved-up.

Some of her fans couldn’t resist commenting, with one saying: “Beautiful photo Louisa.”

Another wrote: “You two are so cute.”

A third typed: “Absolutely amazing and beautiful photo, you both look absolutely stunning.”

Ben proposed to Louisa on their holiday in the Maldives back in May this year.

The star started blubbing “like a baby” when she saw her significant other had dropped on one knee during their recent romantic break, and despite being excited she also started “freaking out”.

Speaking in a joint interview with OK! magazine, Louisa said: “When I saw him on one knee I started crying like a baby. I was so excited but my brain went into overdrive and I started freaking out.”

We celebrated, we drank & we flinched at confetti canons! #whatanight #blessed #feelingthelove

The actress, who took part in EastEnders’ Strictly Come Dancing special this year, added: “I had no idea he was going to propose.”

Ben took Louisa to a quiet part of the island to pop the question, and told her he wanted to fly his drone to take some picturesque photos of the surrounding area.

But his proposal didn’t quite go to plan when a cleaner showed up and was “mesmerised” by the unmanned aerial vehicle.

Ben added: “I had to wait for him to leave. The cleaner finally disappeared so I got a speaker out of my bag that I was going to use to play a song for when I proposed but the Wi-Fi signal was bad so I couldn’t get it to play.

“By this point I was so frustrated that I just grabbed the ring and got down on one knee.”

The pair celebrated with an engagement party in July and plan to marry in the US in 2021, with children very much on the cards.

Louisa reprised her EastEnders role as Ruby Allen in September last year, after 12 years away from the BBC1 soap.

Ruby’s love life is very different to Louisa’s, as Ruby recently broke up with boyfriend Jay and embarked on a relationship with Max Branning – only to cheat on him with her best friend’s husband Martin Fowler!