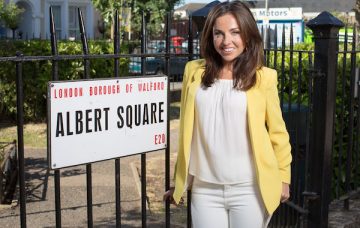 Ruby Allen returns to EastEnders! But fans spot a problem…

Ruby Allen made a surprise return to Walford last night – 12 years after she left.

The daughter of gangster Johnny arrived back in Albert Square and wasted no time in seeking out her old best mate Stacey Slater.

And EastEnders fans were touched to see the reunion between businesswoman Ruby (Louisa Lytton) and Stacey (Lacey Turner).

Read more: EastEnders’ Danny Dyer reveals what Ricky Champ is really like to work with

On Tuesday (18 September), Stacey had no idea that her old ally was back, and was baffled when she was summoned to E20 nightclub by an anonymous text.

Arriving at the deserted nightclub, Stacey turned away disappointed when she didn’t see anybody inside.

However, Ruby suddenly appeared and asked a shocked Stacey: “Not even one little drink then?”

Dressed in a fitted silver skirt and smart white blazer, it was clear the years away from Walford had been good to Ruby.

Is she mad returning then? Surely disaster is always just around the corner in EastEnders!

As she and Stacey chatted over cocktails, some fans were happy to see the nostalgic scenes. But others were left scratching their heads…

How did Ruby know Stacey’s mobile phone number after more than a decade?

Fans pointed out that Stacey must have had the same mobile phone number for 12 years – strange seeing as she was forced to go on the run after stabbing Janine!

One viewer said: “Stacey’s been on the run, had a different identity, and has a new phone, how the hell did Ruby Allen get Stacey’s number?!”

Another added: “Ruby having staceys number after 12 years away even though stacey went on the run for a few years with no number.”

Stacey's been on the run, had a different identity, and has a new phone, how the hell did Ruby Allen get Stacey's number?! #EastEnders @bbceastenders

But how does Ruby have Stacey’s number, she hasn’t still got the same phone, or have they kept in touch over the years? #EastEnders

@bbceastenders OMG Ruby Allen.. Stacey must have that number for like ages #EastEnders

So #Eastenders tell me how Stacey Slater/Fowler has had the same phone number since 2006… how? And Ruby didn’t even keep in touch or know she had kids… crap friend 🤔

A third said: “But how does Ruby have Stacey’s number, she hasn’t still got the same phone, or have they kept in touch over the years?”

However, it was confirmed during the show, that the pair had not been in contact for 12 years…

A bit of artistic license by the scriptwriters, perhaps?!

Despite her happy return, Ruby is set to become involved in a horrifying rape storyline, which will see her attacker deny all charges.

The actress has been working with Rape Crisis about the plot, which aims to tackle the issue of consent.

Were you happy to see Ruby Allen’s return? Leave us a comment on our Facebook page @EntertainmentDailyFix and let us know what you think!