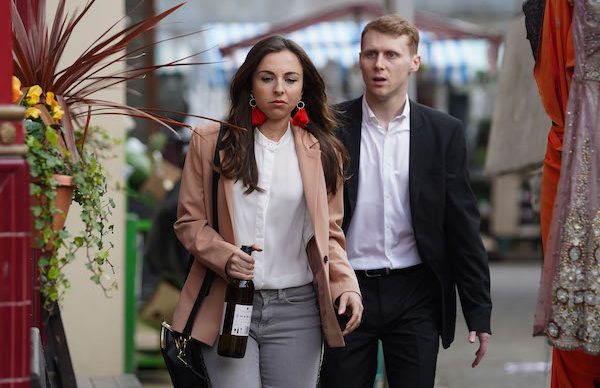 EastEnders SPOILER: Ruby and Jay on the rocks

Is the romance dead?

There’s trouble heading for EastEnders‘ Ruby Allen and Jay Brown as their romance hits the rocks next week.

Ruby and Jay have had a tricky romance to say the least, but somehow they keep finding themselves drawn to one another and manage to put their differences aside.

However, next week sees their jobs come between them when Jay discovers Ruby earns a small fortune in comparison to him.

When he learns how much money his girlfriend takes home, Jay’s nose is put well and truly out of joint as he becomes convinced that he’s not good enough for her.

But while he is secretly insecure about the whole thing, Ruby is oblivious and inadvertently makes things worse when she offers to take him out of dinner that evening.

Jay confides in Billy about his feelings over Ruby’s cash, and while Billy is understanding, he also spots a chance for things to turn sour between Jay and his girlfriend, paving the way for Lola Pearce to make her move.

And it seems Billy’s belief that things are doomed between Jay and Ruby are seemingly confirmed when Ruby overhears Billy talking about her wealth in the pub and lays into Jay for discussing her private life.

But thankfully for Jay and Ruby (and sadly for Lola) the couple have a heart-to-heart and manage to make amends… but how long will their truce last for this time?

With her heart broken once again by Jay, Lola decides it is time to leave Walford and makes plans to head back to Newcastle with daughter Lexi.

But when Jay hears that Lola is leaving, will it make Jay realise he still has feelings for his ex?

Or is his future firmly fixed on Ruby?

Do you think Jay is better suited to Ruby or Lola? Leave us a comment on our Facebook page @EntertainmentDailyFix and let us know what you think!