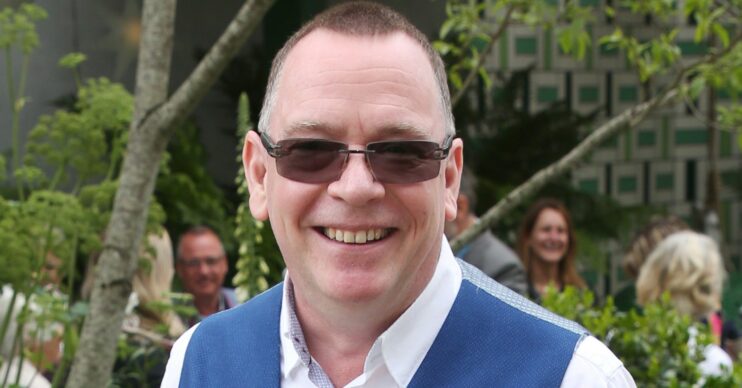 The soap favourite is looking better than ever

EastEnders star Adam Woodyatt has left fans gobsmacked over his weight loss transformation, as he posed with a cardboard cutout of himself.

The soap favourite, who is best known for playing Ian Beale, has lost an incredible amount of weight in recent years.

And it was clearly evident in his recent post.

The photo showed Adam, 53, standing alongside a cardboard cutout before his weight loss.

While he previously looked great dressed in a purple suit, the actor looks completely different after slimming down.

He captioned the post: “Small world!! Bumped into myself yesterday instead of @mrjakewood.”

It didn’t take long for soap fans to comment their thoughts, with some even claiming that Adam looked unrecognisable.

In the comments, one said: “Looking a lot fitter now, how can you return to Eastenders as slim Jim? No one will recognise you.”

Another gushed: “Looking so much better now Adam.”

A fourth wrote: “You’re looking so much healthier and happy with your new lifestyle.

“Keep it up and remember life is for living and only you can choose your path.”

You’re looking so much healthier and happy with your new lifestyle.

Meanwhile, others begged for Adam to reveal his weight loss secrets.

They shared: “Wow look how much you have changed and your weight loss is fantastic. What’s the secret in losing all your weight?”

So, how has Adam managed to lose weight?

The soap star has worked wonders to transform his figure over the years.

However, it’s certainly been a lengthy process.

Adam previously explained his weight loss began as he trained for the London Marathon, having first competed in the race in 2017.

Since then, the actor has taken up daily bike rides and exercising.

Meanwhile, he also admitted to receiving a cruel comment about his weight.

He told Daily Mirror Newspaper: “One of the best examples of somebody being rude is when we were at the BBC Good Food show. This woman looks at me and says, ‘You’re fatter than you are on telly.'”