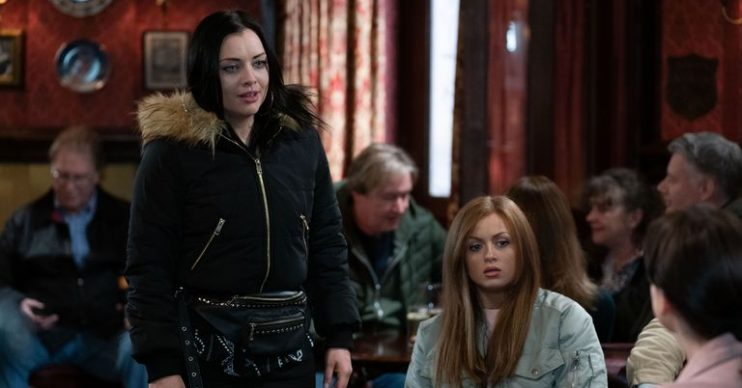 She's back for revenge

Whitney Dean is set for devastation in EastEnders this week as Leo King’s mum Michaela returns – and turns on her.

Tomorrow night (April 13), Whitney will be left shocked when Michaela Turnbull arrives back in Walford to speak to her.

But it will soon emerge that Michaela doesn’t have Whitney’s best interests at heart.

Viewers last saw Michaela when Leo let her out of the car boot he had locked her in for days.

She had tried to stop him terrorising Whitney Dean for telling the truth about his paedophile father Tony King’s crimes.

Instead he locked her in the car boot for days and left her terrified when he finally let her out.

However, despite this harrowing ordeal, it seems Michaela still thinks her son was innocent and blames Whitney for his death.

After organising a meeting with Whitney, it doesn’t take Michaela long to lose it.

She angrily blames her for Leo’s death and things become ugly, forcing Gray Atkins to step in and get Whitney out of there.

He takes her to the pub but it’s not long until Michaela appears there and causes a scene – before she’s sent packing.

What does Michaela do?

Whitney will come to realise that her friends and family are all behaving strangely around her.

Forcing the issue, she demands to know why everyone is behaving so weirdly.

Sonia and Chantelle do their best to put her mind at rest but later on, Ruby Allen unintentionally tells her exactly what has been going on with Michaela.

Read more: Soap fans beg for at least one episode of EastEnders, Coronation Street or Emmerdale to be moved to Thursday

That has catastrophic consequences when Whitney is left utterly distraught by Michaela’s posts.

Whitney is currently caught up in the murder investigation of Michaela’s son Leo – who she stabbed to death in self-defence.

But Michaela refuses to accept that and with Whitney only out on bail, Michaela will do everything she can to put her back in prison.

What do you think of Michaela’s return? Leave us a comment on our Facebook page @EntertainmentDailyFix and let us know what you think!