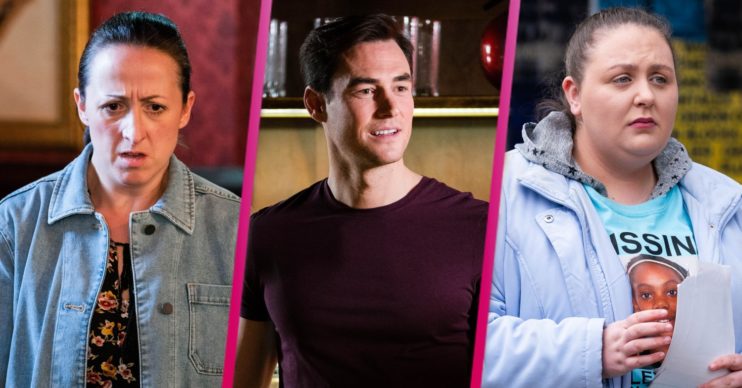 EastEnders is on tonight and spoilers reveal there’s plenty to come as Sonia gets a massive surprise.

Frankie gets a shock when her mum Katy turns up. Meanwhile Lily stirs the pot with Martin and Ruby.

Will you be tuning into EastEnders tonight (Tuesday, May 18)?

Frankie is shocked when Katy turns up at Ruby’s club and quickly leaves.

When she gets to The Vic she notices Mick’s impact statement on the table and Shirley explains how it will be enough to get Katy locked up for good.

However Frankie is hurt and confused. She meets up with her mum, who asks her for a character reference.

Sharon pours over ideas for launching the gym. But soon Ruby, Martin and Lily walk by and Zack flirtatiously asks if they can promote the gym at the club.

Later in the club Sharon and Ruby look over details of the launch event while Zack flirts with Ruby.

But seeing Zack and Ruby flirt, Lily asks Ruby if she fancies Zack. Alarmed, Ruby tells her stepdaughter to keep out of it.

But back at home Lily tells Martin that when he was way in Dubai, Ruby spent lots of time with Zack and that he even spent the night, leaving Martin reeling.

After Rainie told her that she will be finding a different surrogate, Bernie is feeling the pressure to come up with money for her family.

As she leaves, Rainie turns to enter the tube station when she walks into a man named Terry.

Sonia gets a shock

Meanwhile Sonia makes it known to Tiffany that she heard what Dotty said about her.

Later at The Vic, Denise lets it slip that Dotty is a hostess at Ruby’s.

Meanwhile, Terry has found his way to Ruby’s club and is entertaining a crowd.

Soon Sonia bursts in and gives Dotty an earful and makes it clear she won’t stand for her being a hostess and talking to old men, looking at Terry.

Back in The Vic, Sonia is mortified at seeing Terry again. He goes towards her and asks for Sonia. But Sonia disappears again.

He tells Tiff and Denise that he has been looking for Sonia after she sent him a letter. His is Terry Cant, Sonia’s father.