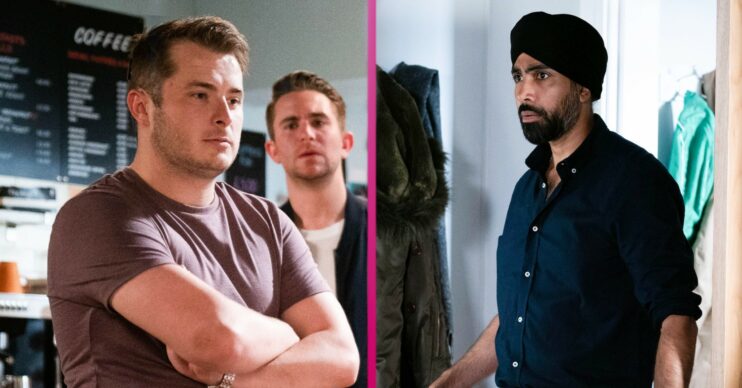 Ben and Kheerat recently went into business together

EastEnders spoilers for tonight reveal that Ben and Kheerat grow frustrated with each other over business.

Meanwhile Suki is left upset after overhearing Kim and Honey talking and Lola comes to a decision.

Callum is worried about Kheerat being so involved in the new business but Ben insists that it’s fine.

However when Kheerat announces that he’s done a deal for some new business, Ben is left frustrated.

They’re at odds over how to run The Arches and Ben announces he wants out, leaving Kheerat furious.

Read more: Strictly Come Dancing cast: Why did Nina Wadia leave EastEnders? Would she ever go back?

Honey offers to help Suki sort through Jags’ belongings as Jay interrupts with some good news – she’s been nominated for a Pride of Walford award for the party over Christmas.

They have a fancy dinner to go to leaving Suki disappointed.

Later Kim and Honey put their foot in it with Suki, not realising she’s listening in.

Suki later makes a start on clearing out Jags’ stuff, upset about what she heard and throws everything in the bin, much to Kheerat and Ash’s horror.

Ben approaches to apologise to Kheerat, but a police car soon pulls up.

Sheree convinces Lola to break up with Isaac

Kat sees the error of her ways and apologises to Kim, passing along her well wishes.

Sheree tells Lola to break up with Isaac, persuading her it’s the right thing to do. Lola visits Isaac and breaks the news.

Jay and Billy prepare for the penalty shoot-out

Jay and Billy prepare for the penalty shoot-out as Kim arrives. The shoot-out starts.

EastEnders continues tonight at 7.30pm on BBC One.