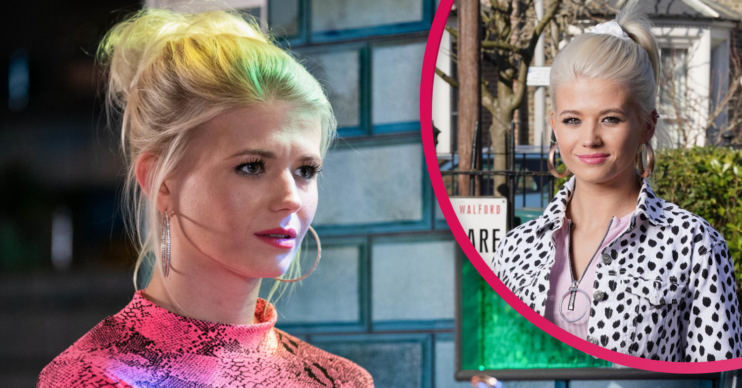 Who is Lola Pearce in EastEnders? What’s her history with Ben Mitchell?

The young mum is supporting boyfriend Isaac but has she taken on too much?

Lola Pearce in EastEnders is, despite her name, a member of the Mitchell family.

So she’s right in the centre of all the Mitchell family dramas!

Lola arrived in Walford in 2011, when Billy and his childhood sweetheart Julie Perkins decided track down the son Julie had given up for adoption when they were both 15.

They discovered their son, Dan, had died but he had a daughter called Lola who was in care.

When Billy bonded with his granddaughter, she followed him to Walford where she stayed until 2015, before returning in 2019.

Who plays Lola Pearce in EastEnders?

Lola Pearce in EastEnders is played by Danielle Harold.

Danielle got a glimpse of the world of showbiz when she was a teenager and was selected to take part in a reality show called Jamie’s Dream School.

Celebrity chef Jamie Oliver put together a teaching staff of celebrity experts and picked kids who hadn’t passed many GCSEs to attend his school.

Danielle, who’d missed a lot of school through illness and only passed one GCSE, thrived in the show and, although she considered aiming for university, chose to audition for acting roles instead.

She got the part of Lola in 2011, when she was just 19. Although Lola is about five years younger than her alter-ego.

What happened when Lola got pregnant?

When Ben Mitchell – Lola’s distant relative – was struggling with his sexuality, he and Lola slept together.

Although their night together confirmed to Ben that he was gay, Lola later discovered she was pregnant.

At first she told Ben he wasn’t the father, and he believed her.

Lola gave birth in McClunky’s in a live episode in 2012, specially for the London Olympics while her grandfather Billy Mitchell carried the Olympic torch in Walford.

But baby Lexi’s early days weren’t easy. Lola was under the care of social services and she turned to Phil Mitchell for help, revealing he was her baby’s grandfather.

Phil tried to take Lexi from Lola, but the young mother stood her ground and fought to keep her little girl.

Since then, Lola’s not been afraid to speak out about the Mitchells’ misdemeanours. Brave woman!

Who has Lola dated?

Lola shared a kiss with Jay Brown when he was with Abi Branning, but then struck up a relationship with Peter Beale.

When Peter’s sister, Lucy Beale, was murdered, things got tricky between the pair. They eventually split when Peter began seeing Lauren Branning.

She and Jay got back together and they planned to leave Walford with Lexi and their friend Dexter Hartman.

Lola and Dexter left first and Jay didn’t join them because they became a couple and he decided to stay in Walford.

Read more: Who is Buster in EastEnders? What happened with him and Shirley?

However, when Lola returned to Albert Square in 2019 – along with Ben Mitchell and a plan to fleece Phil – she and Jay were soon back together.

For a while it looked like they were meant to be, but things got complicated when Lola discovered she was pregnant.

Jay wanted her to keep the baby but Lola wanted an abortion. He later proposed, but Lola said no, assuming he just wanted the baby.

She found comfort with Peter Beale and she and Jay broke up.

What’s happening with Lola Pearce and Isaac Baptiste in EastEnders?

Lola and Isaac Baptiste were set up by Kim Fox. The cute couple were clearly attracted to one another but their romance hit a snag when Isaac’s mum, Sheree Trueman, tried to interfere.

Read more: Who is Isaac Baptiste in EastEnders and what is his mental health battle?

At first, Lola was annoyed and thought that Sheree was being snobby about her being a single mum. But, as it turned out, Sheree was concerned about Isaac, who is diagnosed with schizophrenia.

Since then Isaac has decided to stop taking his schizophrenia medication and Lola is supporting him. But he is becoming erratic and it looks like things might be getting harder for him – and Lola.

Will their relationship survive? Leave us a comment on our Facebook page @EntertainmentDailyFix and let us know what you think.