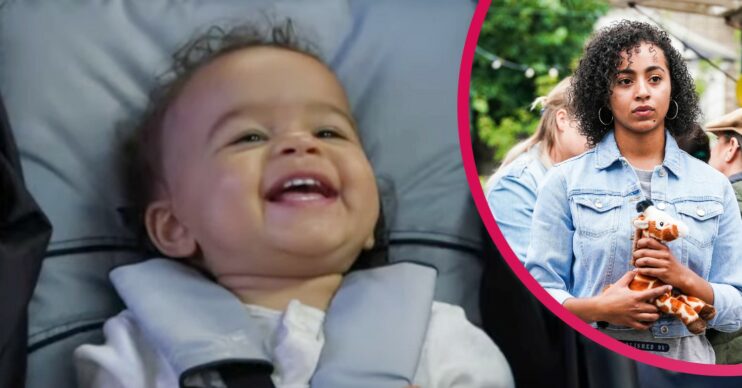 Alyssa was left with Zack, Martin and Sharon

EastEnders spoilers for tonight reveal that Zack and Sharon meet Alyssa’s mother, but who is the father?

In the market, Zack takes Alyssa off Martin but as he walks off her toy drops and unbeknownst to him a girl watches on.

Later both he and Martin receive the paternity test results.

Alyssa’s toy has been dropped off and when they scan the area Zack spots a girl.

Once Zack and Sharon catch up to her she tells them her name – Jada.

She admits she’s Alyssa’s mother and when she reveals who the father is Sharon and Zack are shocked.

Who is Alyssa’s father?

Read more: Who is the father of baby Alyssa in EastEnders? Five fan theories

Frankie is still in the boot of the car crying out for help.

In the Vic, in front of Janine, Mick makes Nancy tell him what she did after trying to get hold of Frankie all night.

They’re all horrified when they realise Frankie’s phone is still at the bar.

Janine gets a message that she needs to see Liam ASAP and with Billy there, Liam tells her he stole a car.

It dawns on Janine that it’s Frankie’s. Later she’s shocked that Mick has brought in Jack to help them find Frankie and tries to put them off searching.

Callum tells Ben and Jay about the Prince Albert’s gay icon’s event night, but notices Jay mouth something to Ben.

When Callum questions him, Ben tells him about his past numerous partners, Callum is left feeling insecure.

Later Chelsea and an excited Kim announce the news, but Denise has a few home truths for Chelsea.