The fall out from Mel Owen's dramatic car crash in EastEnders has been revealed in new photos ahead of Thursday night's episode.

The Walford businesswoman appeared to die in a dramatic car crash on Tuesday night (November 12) during scenes which viewers said were some of the best they'd ever seen on the BBC soap. 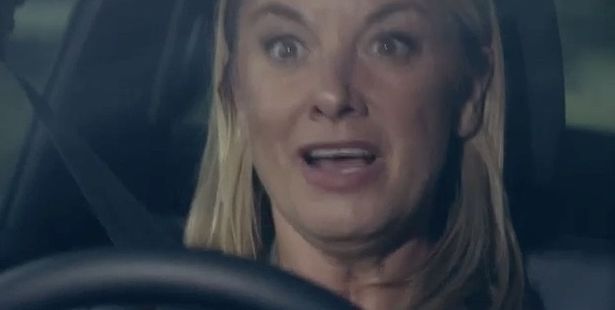 Mel's plot to expose Sharon and Keanu Taylor's baby secret ended in disaster, when her vehicle was seen smashing into another car, and turning on its roof after a high-speed car chase with Sharon Mitchell.

Fans were left wondering whether Mel had survived the accident or perished in the pile up.

And now the BBC soap has released three new images teasing the aftermath of the crash. 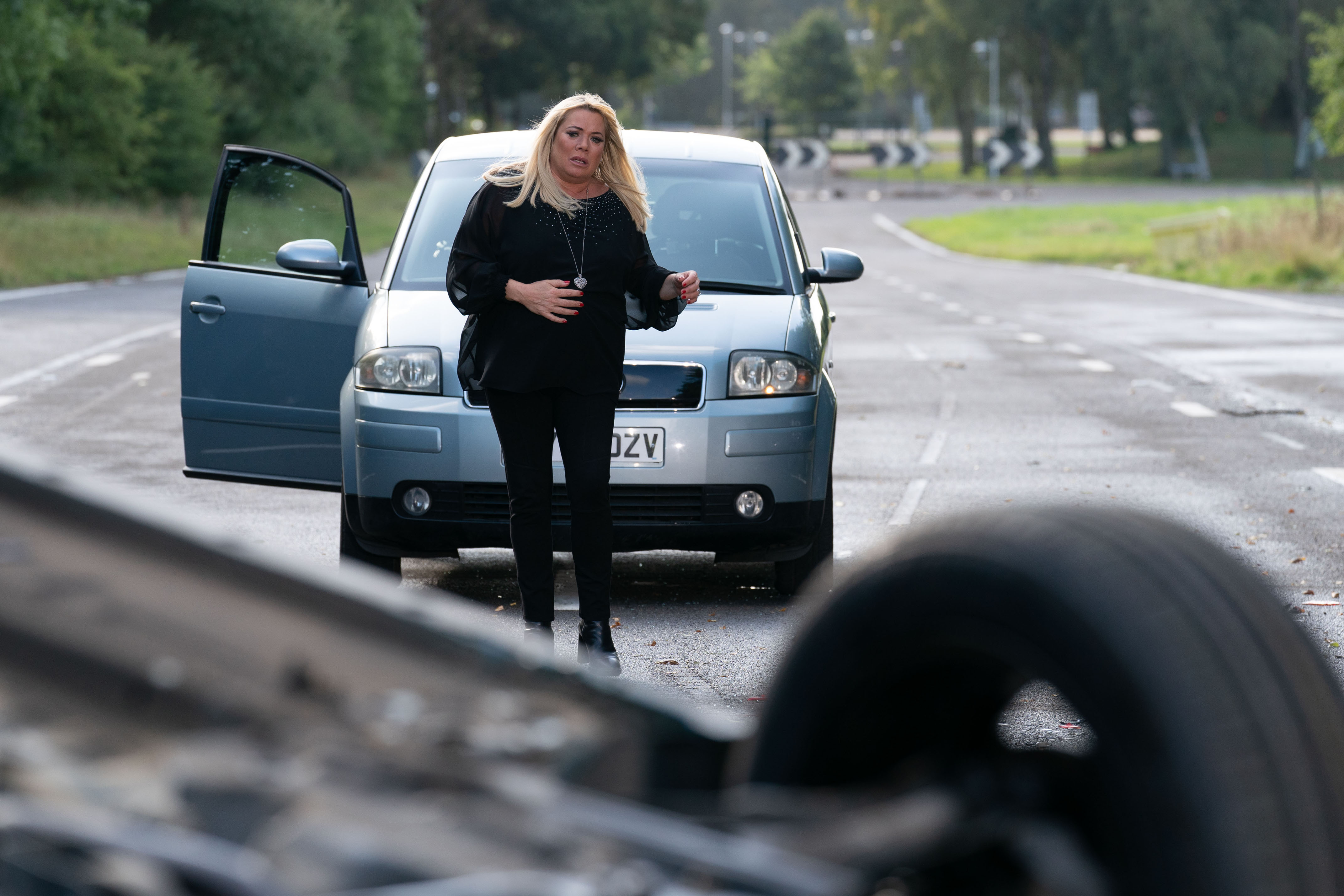 Pregnant Sharon Mitchell was lucky she wasn't involved in the accident herself (Credit: BBC)

In one shot, Sharon can be seen looking anxious as she approaches the wreckage of the upturned car.

But fans will have ever right to be concerned for her, as the pregnant wife of Phil could be in danger herself with the car liable to explode at any moment...

A second photo shows Sharon several steps closer, seemingly about to look into the front seat of the car - but is Mel alive or dead? 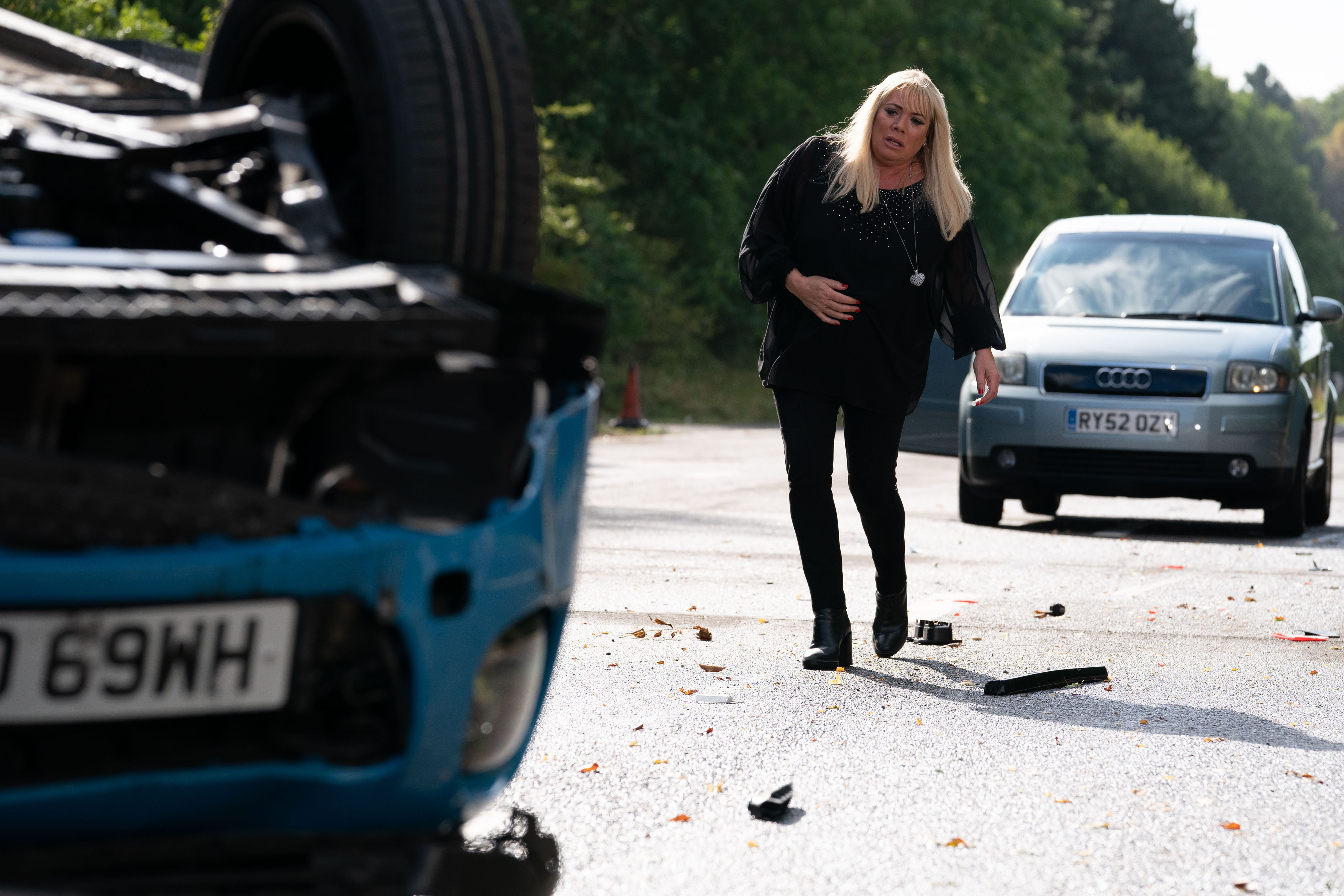 The last preview picture appears to show pregnant Louise Mitchell in tears as she hears shocking news, with Keanu Taylor listening attentively beside her.

Phil, no doubt terrified for the safety of his wife, can be seen just out of shot.

Viewers were on the edge of their seats when Mel left Sharon and daughter-in-law Louise Mitchell's joint birthday party at the E20 club, determined to beat Sharon to the airport to greet Phil Mitchell stepping off a plane. 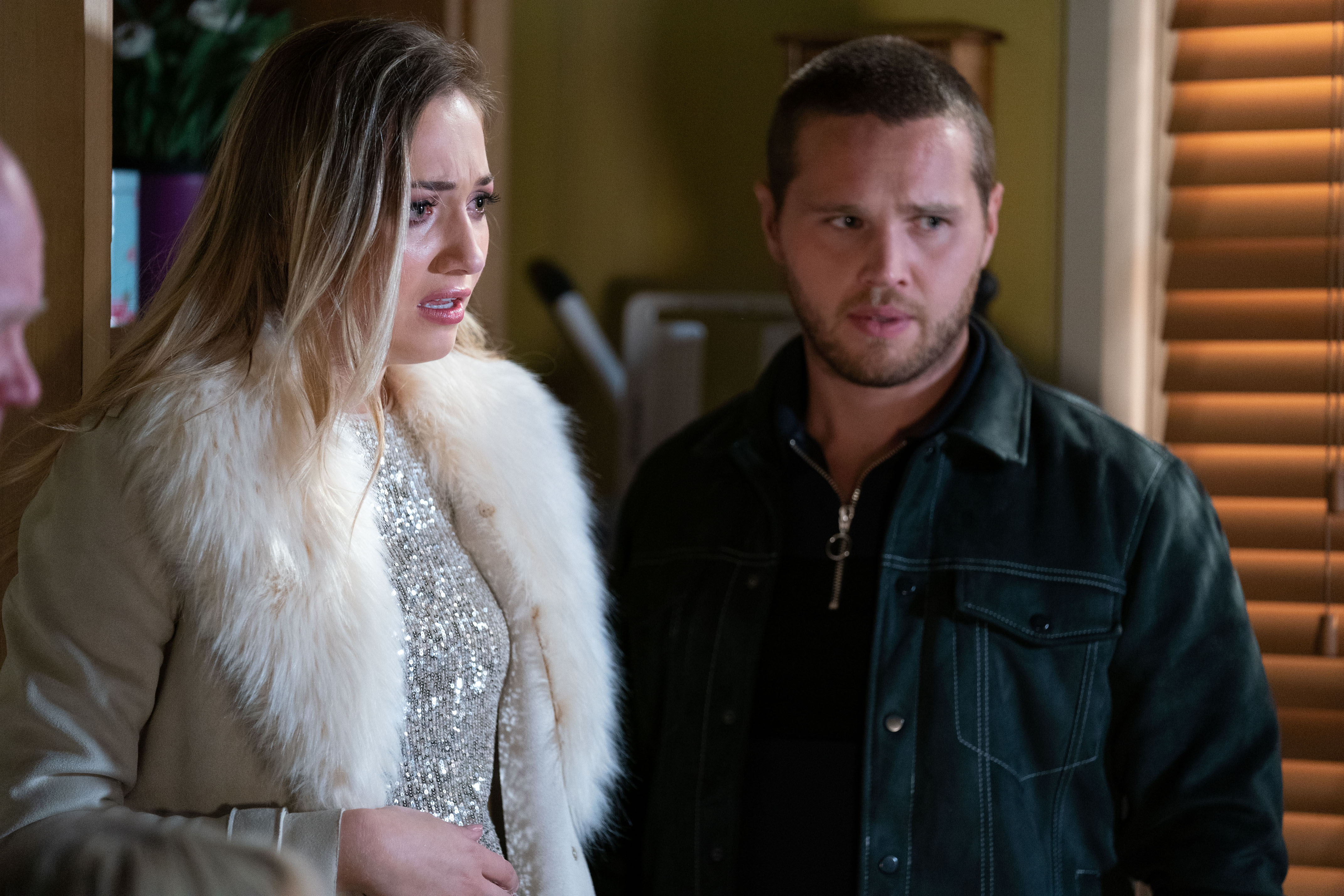 Pregnant Louise is in tears as she appears to hear shocking news (Credit: BBC)

Mel, bitter with rage after her son Hunter's death, planned to spill the truth about Sharon's real baby daddy to Phil.

In extremely tense scenes, Sharon and Mel raced alongside each other on the motorway as Mel called Billy Mitchell back at the club and ordered to be put on loudspeaker so the guests could hear a little announcement about some "home truths".

Well Tamzin Outhwaite, you're part of what I think has been the best EastEnders stunt in YEARS.

But just as Mel had everyone's attention, she didn't spot a broken down car up ahead and, failing to swerve, smashed into the back of it, flipping over in the air and crashing, almost causing a pile-up.

Driving behind, Sharon narrowly avoided the carnage herself... 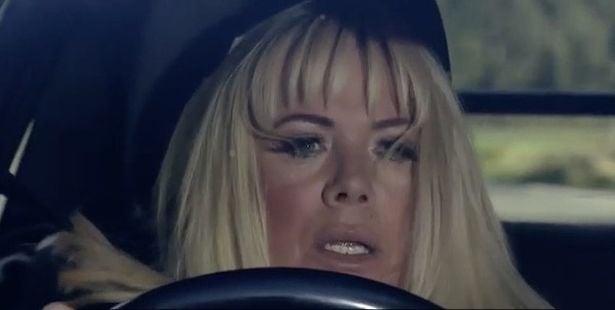 While Mel's fate was unconfirmed, many fans watching from home believed she had died in the accident - tying in with actress Tamzin Outhwaite's exit scenes.

We'll have to wait until Thursday (November 14) to discover whether Mel's obsession with Hunter's death and getting revenge cost her her life...

But many fans were quick to point out that Mel's late husband Steve Owen also perished in a car crash en route to the airport having kidnapped baby Louise, with Phil in hot pursuit.

Applauding the episode, one wrote: "Well Tamzin Outhwaite, you're part of what I think has been the best EastEnders stunt in YEARS. I'm literally shocked, speechless."

Well, @mouthwaite - you're part of what I think has been the best EastEnders stunt seen in YEARS. I'm literally shocked, speechless. #EastEnders

Can the stunt people get all the baftas for that #Eastenders?

THAT ENDING WAS BRILLIANT!😱😱😱😱 #EastEnders

A third added: "Can the stunt people get all the BAFTAs for that episode of EastEnders?"

"That ending was brilliant!" gushed one more, and another said: "Well done EastEnders, that was awesome!"

Revealing her decision to quit the soap, actress Tamzin Outhwaite said: "When John Yorke asked me to return to EastEnders back in 2017, I jumped at the chance to play Mel once more but it was only supposed to be for a year.

Do you think Mel Owen is really dead? Let us know on our Facebook page @EntertaimentDailyFix.