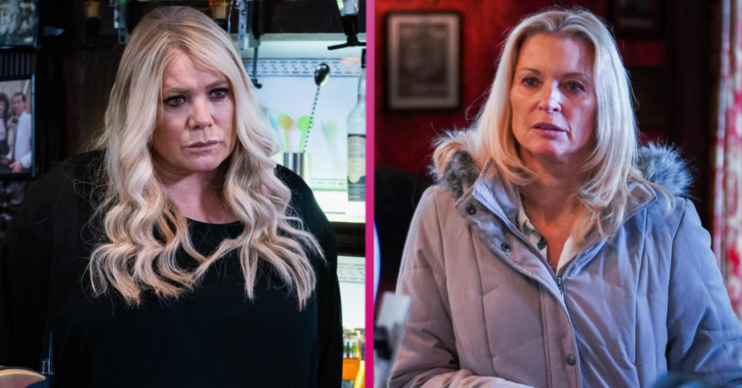 Kathy is determined to get the truth out of Sharon

Sharon Watts may finally be about to confess all about Ian Beale’s murder plot if new EastEnders spoilers are anything to go by.

Queen Vic landlady Sharon has been hiding the truth from Ian’s mother Kathy ever since he fled the Square.

Viewers know she had been trying to kill Ian for months after discovering he was responsible for her son Denny’s death.

She first persuaded ex Phil Mitchell to kill him – but that attack was foiled.

As was his second attempt on Ian’s life.

Sharon then took matters into her own hands and married Ian – giving her opportunity to poison him.

But when she finally went through with her plan, Ian discovered what she was up to and confronted her.

Seeing the pain he had caused her, Ian agreed he should die and began eating her poisoned pasta.

However at the last moment Sharon rushed back and saved Ian, forcing him to throw up.

He then fled the Square when she denied him a second chance at their marriage.

Ian later signed over the Queen Vic to her by sending his solicitor to do the deed in his absence.

EastEnders spoilers: Will Sharon Watts reveal all to Kathy Beale?

With no word from Ian directly, his mother Kathy has been determined to find out what really happened.

And soon she will have her chance.

With Linda Carter, Max Branning and his brother Jack all knowing her secret, it comes time for Sharon to reveal the truth to Kathy.

When the pair receive news that Gavin – Sharon’s father, and Kathy’s ex husband – has died, they attend the funeral together.

And Kathy takes the opportunity to bring up Ian once more.

But will Sharon admit to what she’s done?