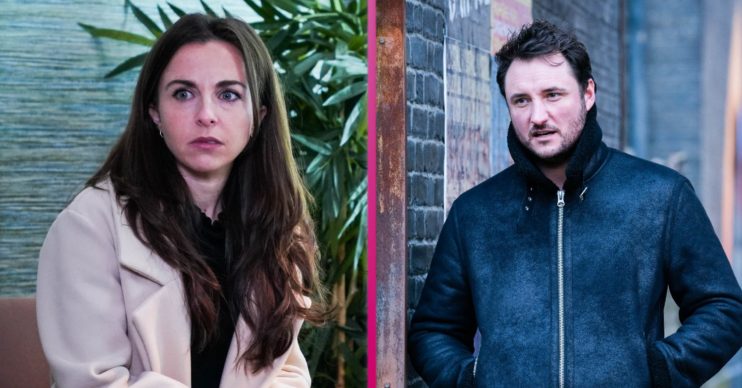 Ruby accused Stacey of pushing her down the stairs

EastEnders spoilers reveal Ruby is given more devastating news after her miscarriage.

A couple of weeks ago Ruby discovered she had a miscarriage. The following day she got into an argument with Stacey and ended up slipping down the stairs.

She later claimed Stacey pushed her down the stairs and that’s the reason she lost her baby.

In next week’s scenes Stacey gets bad news from her solicitor. But Mo has some good news – she has a lawyer for Stacey.

She takes one of the necklaces and takes it to the pawn shop. Feeling awful about what she’s done, she bumps into a happy Ruby and Martin and angrily confronts them about what they’re doing to Stacey.

Ruby makes her feelings about Stacey pretty clear to Kush, explaining Jean’s outburst the day before.

Kush checks in with Jean. To his surprise, she shows remorse and worry for Martin and suggests Kush take him out for a drink that evening, unbeknownst to him, she has a plan.

Later Ruby is shocked to find Jean in her living room. She begs her to drop the charges against Stacey.

Jean and Stacey prepare for her lawyer to arrive. Jean catches Ruby. Ruby tells her that she will call DS Barnes and drops the charges.

Meanwhile, Stacey sits down with her lawyer who advises Stacey she could get the sentence down to six months if she pleads guilty.

But Jean bursts in and tells Stacey that Ruby is dropping the case. But Stacey is suspicious and wants to confront her former best friend. Jean convinces her not to and tells her to relax.

Meanwhile at the club, Ruby leaves a message for DS Barnes. Will she ask them to drop the charges against Stacey?

Read more: Jack Branning in EastEnders: How many times has he been married?

Later Ruby and Martin go to a medical appointment where the doctor informs her she may have endometriosis, which affects her fertility.