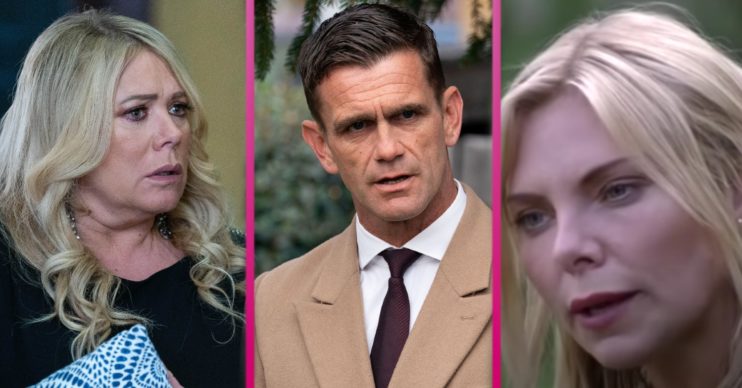 Jack Branning in EastEnders: How many times has he been married?

Jack Branning has been in EastEnders since October 2007. Recently Jack got engaged to girlfriend Denise, but how many times has he been married?

Jack Branning in EastEnders: Who is he?

Jack Branning is the son of Jim and Reenie Branning.

He is also the brother of Derek, April, Carol Jackson, Suzy and Max.

The character is played by actor Scott Maslen.

Jack Branning in EastEnders: How many kids has he got?

Jack has four children. His oldest child is his daughter Penny, who appeared on-screen from January to April 2008.

When James was just one day old, his mum Ronnie Mitchell found him dead – he died of Sudden Infant Death Syndrome.

She ended up swapping James for Kat Slater and Michael Moon’s baby, Tommy. For the next few months James was presumed to have been Tommy and was buried as Tommy.

In April 2011, Ronnie admitted the truth. Tommy was returned to his parents and Jack changed he gravestone to read James Branning.

Jack is also the father to Amy Mitchell and Ricky Mitchell.

Yes, Jack clearly has a thing for the Mitchell women!

Who has Jack dated and how many times has he been married?

Jack has been married twice but has had his fair share of engagements.

Jack’s first marriage was to a woman named Selena. Selena is the mother of Jack’s daughter Penny.

He built a career in the police but would often get involved in criminal activities.

Before his life in Walford, one of Jack’s informants knocked Selena and Penny down with his car in revenge for being accidentally sent down.

Penny’s spinal chord was severed, leaving her paralysed from the waist down. In the aftermath, Jack and Selena divorced.

After arriving in Walford, Jack began a relationship with Ronnie Mitchell. But when Jack slept with Selena, she ended their relationship.

They later reconciled but Ronnie struggled to trust him. Later Jack slept with Ronnie’s sister Roxy, and she fell pregnant with Amy.

Later Jack had a romance with his sister-in-law Tanya and supported her during her split with Max, who had been having an affair with his daughter-in-law Stacey.

But they ended up splitting and Jack ended up having an affair with Sam Mitchell, Ronnie and Roxy’s cousin.

Later it was revealed Sam was pregnant with Jack’s son Ricky.

Jack went on to start a relationship with Sharon Rickman and proposed to her. They were due to get married in 2013, but just before his wedding he learnt Ronnie was going to be released from prison.

He ended up jilting Sharon at the altar.

After being on and off for many years, Jack and Ronnie got married on January 1st 2017.

However after their wedding, Ronnie and Roxy both drowned in the hotel swimming pool. Roxy, who had been drugged, jumped in and ended up banging her head on the side of the pool.

When Ronnie realised what happened, she jumped in to save her sister. But her wedding dress dragged her down and both sisters died.

Currently Jack is engaged to Denise Fox, who has been dating for the last year.

Jack has also had relationships with Chelsea Fox, Rainie Branning and Mel Owen.