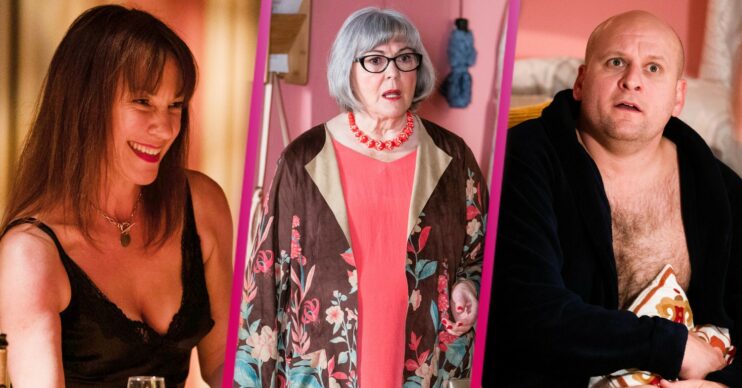 Violet is currently living with Rainie and Stuart

EastEnders spoilers for next week reveal Rainie and Violet reach a deal about spending time with Stuart.

Violet came to Walford a few months ago and has been staying with Stuart and Rainie.

Rainie became fed up of Violet’s constant comments and interfering and demanded she went back home.

However Violet confided in Rainie she not longer had a home. She let her son Jonno move back in and he ended up kicking her out, leaving her with no where to go.

In next week’s scenes Rainie is frustrated that she hasn’t been able to spend time alone with Stuart.

The two plan to spend some time together, but Vi ends up ruining the mood and Rainie loses her cool.

Fed up, Stuart asks his grandmother to move out, but Rainie is desperate to protect her husband from the truth about Violet’s situation with Jonno.

Soon Rainie and Violet come to an agreement away from prying eyes. A truce is called at last, but what is their agreement?

How long can Violet keep her secret from Stuart?

Recently Stuart and Rainie were left heartbroken when Rainie’s great-niece Abi was taken by her grandfather Max.

This made the couple even more determined to have a child of their own.

They recently came to the decision that they want Bernie Taylor to be their surrogate, will it all go to plan?

All of this week’s episodes are available to watch on BBC iPlayer.