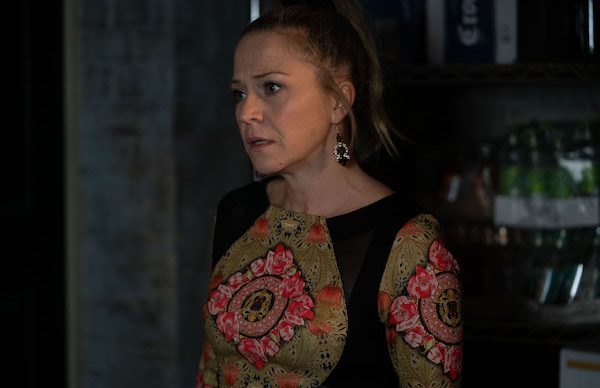 Will he track them down?

Next week’s EastEnders sees Mick Carter immediately think the worst when wife Linda and son Ollie are nowhere to be found. But where have they disappeared to?

Fans have watched Linda’s drinking spiralling out of control since before Christmas, and next week things get even worse when Linda overhears Jean and Mo Slater gossiping about her, and Mick fails to stand up for her.

Heartbroken that even her own husband is thinking the worst of her, Linda decides to cope with her problems the best way she knows how and heads to the Prince Albert to hit the bottle.

But it seems drowning her sorrows doesn’t even help this time, because she soon hits her head leading to Tina refusing to serve her any more alcohol.

Realising that Linda is in a bad way, Tina calls Mick and tells him to come and rescue his wife, but what sort of state will he find Linda in?

After another heart-to-heart the morning after the night before, Linda assures Mick that she doesn’t need to go to rehab and promises to ration her drinking in a bid to curb her benders.

Of course Linda sticks to her promise for all of five minutes, and it’s not longe before temptation proves too much for her.

But, determined to prove Mick wrong later in the week, a sober Linda decides to have a day out with Ollie and her husband, hoping that a family day is what she needs to take her mind off the booze.

Mick is thrilled to see a glimmer of the Linda he knows and loves and it looks like things might be finally picking up for the family. However, Linda’s good mood is short lived when she makes a shocking discovery…

Things then take a sinister turn when Mick realises Linda is nowhere to be found, and neither is Ollie.

The pair have vanished… but while Mick starts to think the worst, little does he know Linda has taken Ollie out of school for the day.

She later arrives home and is adamant that she hasn’t done anything wrong, but Mick is fuming and their marriage is hanging by a thread as they argue.

Is this the end of the line for Mick and Linda?

Do you think Mick and Linda can save their marriage? Leave us a comment on our Facebook page @EntertainmentDailyFix and let us know what you think!