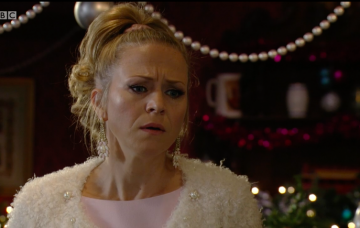 She'll turn to alcohol as she struggles with mounting family issues

The BBC soap announced today (September 4), that they are working with Drinkaware on the upcoming plot, which will see Linda find refuge in alcohol as she struggles with the mounting pressures of daily life.

Viewers know that the Carter family have been through some tough times recently.

The family were terrorised by Mick’s co-called friend Stuart Highway, which led to Mick being falsely imprisoned for a crime Stuart set him up for.

After his ordeal inside, Mick has been suffering panic attacks which have left him fearing for his life.

Meanwhile, Mick and Linda’s son Ollie is being tested for suspected autism, just months after Linda’s own fears her cancer had returned.

It’s enough to make anyone despair.

Despite trying to put on a positive front, the pressure begins to weigh heavily on Linda in the coming weeks and the matriarch turns to alcohol.

Viewers will see Linda – played by Kellie Bright – drinking more and more, and her alcoholism will soon manifest into a bigger problem that she will struggle to hide.

She added: “Working with EastEnders on this storyline will help us put a spotlight on the potentially harmful result of getting into the habit of drinking regularly.

“Credit to the scriptwriters who are sensitively showing the journey of how easy it can be for someone to develop risky drinking habits.

“Linda’s experiences with alcohol demonstrate why it’s important to be able to recognise signs that you, or someone you care about, could be developing drinking habits that could cause harm to themselves or others.”

Jon Sen, Executive Producer of EastEnders, added: “This autumn, the Carters will face one of their biggest crises to date when Linda turns to alcohol to escape the increasing pressures of her family life.

“Linda’s descent into alcoholism will be instantly recognisable to many – a journey that begins with a single drink to cope with the everyday ups and downs but quickly escalates to a point which wreaks devastation on their life and the lives of those around them.

“In telling Linda’s story we hope that anyone in Linda’s situation or those around them notice the signs of alcoholism and seek the help needed.”