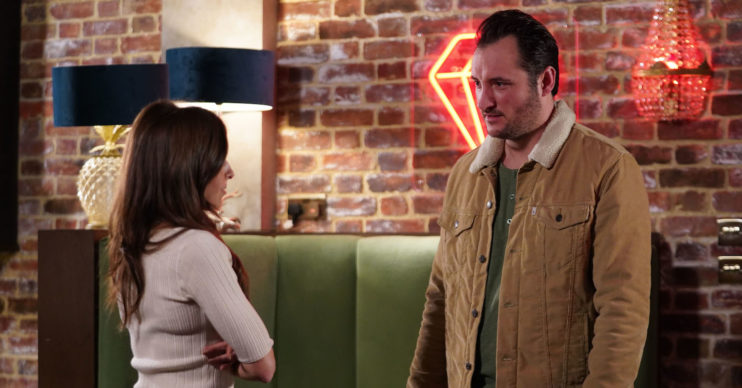 Stacey has been away from Walford since last year

In next week’s EastEnders, Max notices Ruby and Martin getting closer. Will the pair end up having an affair?

Currently Max is openly dating Ruby. However, a couple of months ago she ended up sleeping with Martin Fowler, who is the soon-to-be ex-husband of her best friend Stacey.

But next week things look like they’re about to become even more complicated.

With Ruby moving into Number 43, Jack offers Max some advice about his relationship.

But Max is further put out when he spots Ruby and Martin flirting. Are they about to have an affair?

Wanting to prove himself, Max soon pulls up Vinny on dealing laughing gas. Is it enough to impress Ruby or will it push her further in Martin’s arms?

The history of Max, Ruby, Martin and Stacey

Fans of the show know Max, Ruby, Martin and Stacey all have a complicated past.

Stacey had an affair with Max in 2007. She went on to marry Martin Fowler but she cheated on him in 2017 with Max.

He eventually forgave her and they got back together. Before leaving the Square, Stacey was unhappy to find out Max was now seeing her best friend Ruby.

But Stacey and Martin soon ended up fleeing Walford after she attacked Phil Mitchell. Eventually Martin ended his marriage with his wife in order to keep her away from harm from the Mitchells.

Since splitting with Stacey, Martin slept with Ruby much to Max’s annoyance.

When will Stacey return?

While it hasn’t been revealed when Stacey will return to Albert Square, it looks like it could be soon as her mum Jean is struggling with her mental health.

In last night’s episode (Tuesday, May 26), the much-missed character made an audio cameo as Kush, the father of her son Arthur, spoke to her on the phone.

But he didn’t appear to tell her about Jean’s mental health. Will her learning the truth be the reason for her return?