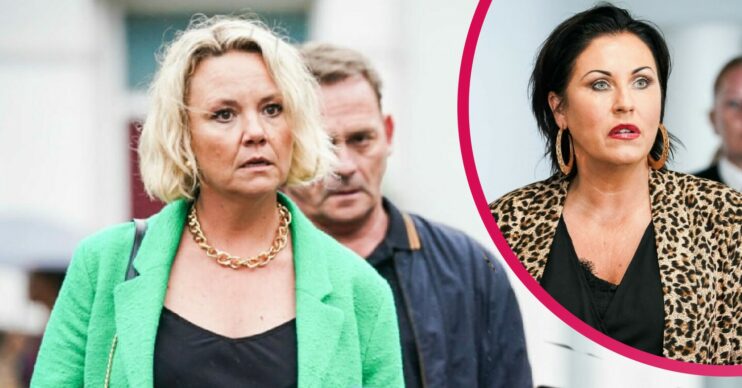 EastEnders SPOILERS: Look out Walford, Janine is back!

She’s bringing big trouble with her

Next week’s EastEnders spoilers show Walford superbitch Janine Butcher back on the Square – and she’s fighting for her daughter.

Kat heads to court this week to offer her services as Scarlett Moon’s carer in a bid to do right by son Tommy.

But just as she’s giving evidence about Janine and her evil antics over the years, the Butcher bad girl bursts in.

She’s determined to win back custody of Scarlett and put Kat back in her place.

Next week, Kat faces a difficult conversation when she’s forced to tell her son Tommy the truth about his father.

He thinks Alfie is his daddy, but Kat explains his biological father is Michael Moon.

It doesn’t take the shocked youngster long to realise that this revelation makes Scarlett his sister.

So, he begs Kat to take the young girl in and give her a home alongside her brother.

Just as Kat is giving her testimony, Janine rushes into court, begging to be heard.

She insists she’s a reformed character and will be an excellent mother to her little girl.

But social services aren’t having a bar of it, and Janine finds herself heading back to Walford to plead with Kat instead.

Within minutes, Janine has thrown the Square into a spin with her sharp tongue and shameless antics.

Kat doesn’t want to hear it when Janine swears that she’s got Scarlett’s best interests at heart.

However, following their showdown, Kat gets a call to tell her that Scarlett has gone missing.

Is Janine behind her daughter’s disappearance?

The search is on!

As Kat mounts a search party, Billy secretly meets up with Janine, who doesn’t have Scarlett with her.

She tells him she’s leaving Walford and giving up on fighting for Scarlett when he reveals the youngster has gone missing.

But when Janine gets a flash of inspiration, she deliberately sends Kat off on a wild goose chase to buy herself time.

At Phil’s house, Janine discovers her hunch was correct as she finds Scarlett upstairs where Tommy has been hiding her.

However, as a shocking confrontation between Phil and Shirley unfolds downstairs, Janine and the children are plunged into a life or death drama.