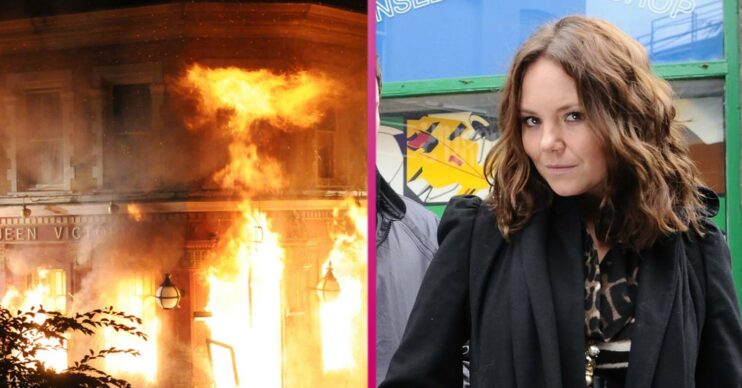 What has Janine done now?

EastEnders is going to be rocked by a huge explosion in the coming months, new spoilers reveal.

EastEnders SPOILERS: What do we know about the new storyline?

According to the Metro, neighbours who live close to the set were left shocked by the stunt.

Emergency vehicles were also spotted in the smoke, hinting at a major disaster with deaths.

A source told the publication: “When we bought our house, we had no idea how close we are to the EastEnders set!

“I heard a lot of sirens and thought something was going on but then realised it was coming from the [nearby] EastEnders set.

“There were ambulances and fire engines and a lot of smoke. It was definitely not an emergency, they were filming something.”

So just what is going on in Albert Square?

A source added: “The explosion is really the start of a massive autumn for the show that will take them through the rest of the year.”

The soap recently delighted fans by confirming the return of Charlie Brooks as Janine Butcher.

Actress Charlie returned to filming earlier this month, meaning troublesome Janine could be in the midst of the drama.

Charlie last appeared in Albert Square back in March 2014. But after seven years away from the soap, she can’t wait to get back to stirring it up.

It sounds like a huge storyline – or maybe more than one – is in the offing for Janine.

Executive producer Jon Sen even teased she could be back in extremely dangerous form as he echoed one of the character’s most famous lines.

He said: “Janine is one of EastEnders most iconic characters who is loved, and often despised, in equal measure by viewers and all those in Walford.

Teasing a notable plot for Janine, he continued: “We have lots of drama in store for Janine. In fact it may be wise for some of the residents of Walford to invest in some slip on shoes…”

Just in case they have to flee an explosion, perhaps?