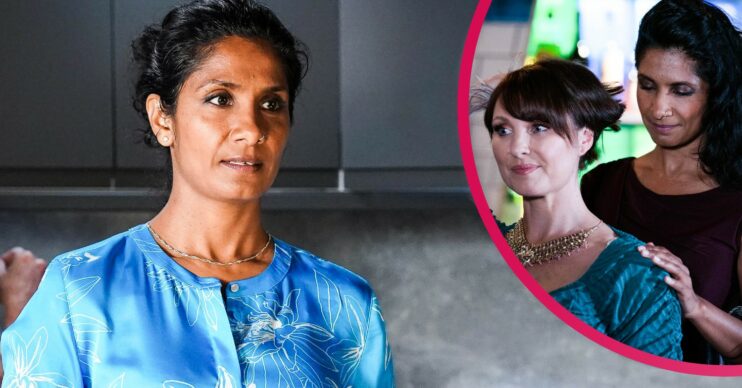 EastEnders spoilers for next week reveal that Suki and Honey grow closer, but could it lead to them being more than friends?

Ever since Suki’s son Jags died, Honey has been trying to look out for Suki.

The two have been spending quite a lot of time together over recent weeks.

After insulting Suki’s painting, Honey felt bad and invited her new friend to be her plus one to the Pride of Walford Awards, where Honey has been nominated for an award.

In next week’s scenes Vinny finally tells Kheerat and Suki that he is renting space in the laundrette to sell and fix phones.

Kheerat berates him for going into business with Phil while Suki stays surprisingly calm.

Suki invites Honey for dinner and they enjoy each other’s company. However when Ash interrupts, Suki is furious with jealousy.

Later Suki softens when she is interrupted by a disappointed Ash, who failed her performance review.

Ash blames it on her mum for previously threatening her manager.

To make amends, Suki plans to expand her empire by buying another property and making it a GP surgery so Ash can work there.

Ash is angered by her plans until Honey defends Suki.

Honey steps in and and makes Ash see another viewpoint.

Suki and Honey go to Pride of Walford awards

Later at Walford East, both Suki and Honey are dressed to the nines for the Pride of Walford awards.

Later Ash apologises to her mum for not appreciating her offer to buy a property for a surgery. However Suki stays nonchalant.